My name is Danielle LoDuca, and I’ll be bringing you some tips and reminders to help you prepare for the upcoming month of fasting, Ramadan.

Now is a great time to start preparing and getting ready for this amazing month, the month in which the verbatim words of our Creator, the Quran, was revealed to the Prophet Muhammad, the best of mankind (peace be upon him).

Not long before I was Muslim, I attempted a juice fast. I had learned about the amazing health benefits that I could reap by giving up solid food for a day or so, and taking in plenty of fresh fruit and vegetable juice.

Well, I didn’t make it through half the day, I broke my fast and I never attempted it again.

So when I entered into Islam, and I found out about fasting in Ramadan, I thought that it was going to be extremely difficult, I thought it might even be impossible for me to do.

But what I learned is that, Alhamdulillah, things that are difficult outside Islam become easier and even desirable within it.

If you think about it, all of us actually fast every single night, so our bodies are used to going for long periods of time without food and drink. The real difference is that when we fast in Islam we’re fasting when we are awake, and the consciousness is actually an important part of reaping its benefits.

So, what are the benefits of fasting?

Allah Almighty said in the Quran:

The Arabic word taqwa is a rich word, it can mean righteousness and piety, self restraint and consciousness of Allah.

So when we emerge from Ramadan, we hope to emerge as better Muslims with greater awareness of Allah Almighty and greater control over our own selves, and we should be more conscious of the fact that we’ll be returning to Allah and that we’ll be accountable for all our deeds.

Allah Almighty also said in the Quran that He loves those who have taqwa. So, what we’re striving for is the love of Allah Almighty. What greater thing is there to strive for?

When Ramadan comes along, it’s a boost. It gives us a leg up, I like to think of it as an escalator or like one of those conveyors at the airport that helps you get from one point to the next faster and more easily. So we get to advance toward our goal that much more quickly and easily, and this is a gift from Allah Almighty that we should truly take advantage of. 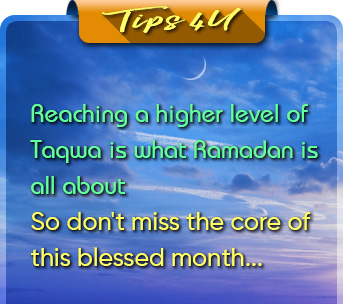 So while we’re fasting, we also want to be aware of our general character and our manners, and we want to work to improve that as well.

So use those pangs of hunger and thirst to help you remember the way that you’re acting and the way you’re behaving, help them propel you to be more kind, to be more generous and to be more patient.

If you have issues like road rage for example, write them down, take the time now to start setting goals of things that you want to tackle and ways in which you want to improve this Ramadan.

Make a list and set them in order priority and the things that you find would be realistic for you to tackle, take them on. So if you have trouble with road rage, make excuses for the driver that cut you off, be patient, calm down, slow down, take it easy.

When we’re talking to people, we want to make sure that we’re speaking with kind words. If we’re uttering bad words and saying bad things and being harmful to those around us, then we’re really not taking advantage of this opportunity.

Other ways that you can use this time are by improving your prayers. The prayers are a communication between us and Allah Almighty.

So if you are a new Muslim, and you’ve learned the prayer but you don’t yet know the meanings of what you’re saying, take this time now to start to memorize the meanings even if you’re memorizing one word at a time or one sentence at a time, use this time to do that.

And when you’re praying every single prayer, stop at the word that you’ve memorized and think about the meaning, think about what you’re saying to Allah Almighty and try to let it really come out from your heart to Him.

This is a communication, you’re speaking directly to Allah Almighty and it’s very important that we know exactly what we’re saying in our prayers.

This is the month in which the Quran was revealed, so even though we’re attending the night prayers, the taraweeh prayers, we will be hearing the entire Quran throughout the month, but you also want to take time to spend time with the Quran in a language that you understand, read its meanings and reflect on them and see how it affects or influences or pertains to your own life.