Racism is not only a problem amongst non-Muslim Americans but the American Muslim Community has its share of it too.
aaa

Racism remains one of the global problematic issues that need to be constantly addressed and tackled.

It exists in every corner of the world, among people of different colors and creeds.

It is a very alarming and troublesome phenomenon as it not only harms individuals psychologically but moreover physically from anything to individual harm or on a collective scale as in apartheids.

Islam takes a clear stance against racism. Allah Almighty emphasizes in the Holy Quran, that the only aspect that would elevate the status of one of us over the other is; righteousness. Interpretation:

{O Mankind, We created you from a single (pair) of a male and a female and made you into nations and tribes, that you may know each other. Verily the most honored of you in the sight of Allah is he who is the most righteous of you.} (49:13)

Islam takes pride in firmly and overtly fighting racism to the extent that Prophet Muhammad (peace be upon him) addressed the issue in his last sermon:

Learn that every Muslim is a brother to every Muslim and that the Muslims constitute one brotherhood. Nothing shall be legitimate to a Muslim which belongs to a fellow Muslim unless it was given freely and willingly. Do not therefore do injustice to yourselves.

Remember one day you will meet Allah and answer for your deeds. So, beware: do not stray from the path of righteousness after I am gone.”

Again, piety and good action are what distinguish a person over the other. There is no room for a preferred race, gender, social class, etc.

Racism in the American Muslim Community 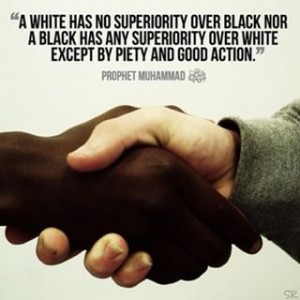 Unfortunately, racism is not only a problem amongst non-Muslim Americans but the American Muslim Community has its share of it too. This goes back to cultural heritages and pre-Islamic traits that have nothing to do with Islam, however some Muslims have been unable to cleanse their hearts from this ignorance.

Prophet Muhammad (peace be upon him) sheds light upon this in the following hadith:

Abu Dharr, during a dispute, insulted Bilal by calling him “son of a black woman.” This was meant to put Bilal down, as his Abyssinian mother was a slave, though Abu Dharr was, himself, a black Arab, as described by At-Tabari, ibn Hajar and others.

Prophet Muhammad (peace be upon him) then told Abu Dharr:

“You’re a man with some of the characteristics of the Era of Ignorance/Pre-Islam (Al-Jahiliyyah).”

Abu Dharr then went to Bilal, placed his face on the ground and offered for Bilal to step on his face to atone for his verbal offense. (Al-Bukhari, 30 and Muslim, 1661)

A Wake up Call

Imam Dawud Walid, the Executive Director of the Michigan chapter of the Council on American-Islamic Relations (CAIR-MI), and a preacher of Islamic faith delivering sermons at Islamic centers across America and a political blogger for the Detroit News, shares a wake up call on racism in the American Muslim community.

“[I]t is racism that has divided the American Muslim community. It is problematic because racism is rooted in positional power, which prevents certain groups from having a voice or equal deference and authority within a community. I have witnessed new reverts to Islam who have been run out of the Muslim community due to racism.

We need a holistic approach for dealing with this issue, which includes individual introspection, regular community and organizational discussions, as well as more purposeful and meaning social gatherings that are multi-ethnic aside from big annual conferences.

I am committed to being a part of such conversations and social events. I challenge all of my brothers and sisters to renew their commitment to ethnic equality within our community and to check those within our own cultural groups that are actively and passively perpetuating racism.

This will require moral courage in the face of uncomfortable moments, but Islam calls us towards freedom, justice and equality that we may be the model community that Allah Almighty calls on us to be.”

However, there is still light at the end of the tunnel. This is evident in successful examples of American Muslims from diverse backgrounds who strongly believed that there is no place for racism in Islam; to the extent that they accepted cross-cultural marriages.

A living example is an Arab American sister who accepted a proposal from her Muslim Chinese colleague. Here is how she puts it in her own words:

“As an Arab American Muslim raised in a tight knit Arab Muslim community, my marriage to a Muslim of Chinese background came as a bit of a shock to many in our community. I remember my parents receiving comments such as, “how can you allow your daughter to marry like this? The rest of our girls are going to want to marry outside of us now.”

Growing up I realized that there was a double standard, many of the non-Arab individuals accepted into the community were female, Caucasian, and had married Arab men, but rarely did I see an Arab woman marry outside of her culture. This attitude is diametrically opposed to what our beloved Prophet Muhammad (peace be upon him) taught his companions, to marry outside their families and tribes. As Allah Almighty explains in the Quran:

{O Mankind, We created you from a single (pair) of a male and a female and made you into nations and tribes, that you may know each other. Verily the most honored of you in the sight of Allah is he who is the most righteous of you.} (Al-Hujuraat 49:13)

Having been married now for over seven years, there is a greater cultural challenge that you encounter being married to someone from a different background, but the benefits of learning another culture, language, and ability to see the world from a different perspective far outweighs the challenges.

I am excited that our children will grow up biracial, and Insha’Allah, with a greater understanding and sensitivity to racial issues in Muslim and American communities.

I also believe in a world that is growing smaller by the day, Muslim children who grow up able to navigate multiple cultures and worlds will be better equipped to promote Islam in a healthy and positive way.”