We should empathize with the questioner, and even if the question is worded very badly, or is really harsh, we should still give the benefit of the doubt and try and answer in the best way possible.
aaa

In an increasingly global world, we hear more and more news from around the world. Unfortunately, the world media doesn’t exactly portray Islam and Muslims in the right kind of light! To be honest, at times our behavior in and of itself is a big turn-off for many non-Muslims— and Muslims as well.

However, what is true is that there are many questions that are asked about Islam and Muslims. Sometimes we do not know the answer to questions. And sometimes we just plain give the wrong answer. Or we might give the right answer but wrongly present it!

This article aims to give those who know the very basic foundations of Islam a blueprint for answering any and all questions about Islam.

Allah sent Moses to the worst tyrant in history, Pharaoh, who was a child murderer, a despot who had enslaved a whole nation. And yet Allah said:

You are never going to be as good as Moses, and the one you are calling to Islam will never be as bad as Pharaoh, so remember to be gentle.

No one could have been more annoying than Pharaoh. He mocked Moses, he mocked Allah, and he mocked the believers, and yet Moses didn’t forget his manners.

Allah says to our Prophet Muhammad:

So by mercy from Allah , [O Muhammad], you were lenient with them. And if you had been rude [in speech] and harsh in heart, they would have fled from you. (Quran 3:159)

Allah is saying that if the Prophet had been harsh, then the companions would have fled from him. The best man sent to the best group of people with Allah’s message would have failed if he had had bad manners! So, where do we stand? 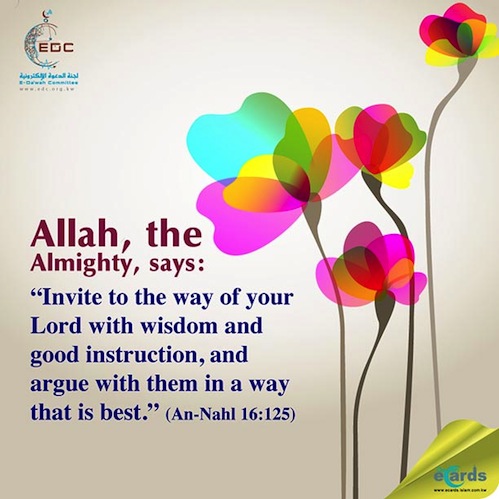 2- Do it Sincerely for Allah

When we are put on the spot and asked a question, there are many thoughts that can go through our minds. Satan tries to get us to lose our temper or to lose our intention. He might make us lose our tempers and that turns the questioner away. Or he might make us try and show off all our knowledge and thus we give too much information or make the conversation irrelevant, and the dawah suffers.

Remember to always remind yourself and to remind Satan that you are answering only for the sake of Allah, to help someone else understand Islam.

If you are doing it only for the sake of Allah, you will not show off. And if you want Allah to guide the person, you would not mock, scold, or shout at the person you are answering.

3- Empathize with the Questioner

Many a time I have seen people mock and ridicule someone’s question. As a medical student, we have always been taught, “there is no stupid question,” and that is true of Islam as well.

Often the ones asking us questions about Islam have no clue about what Islam is. They might ask questions that might seem judgemental, stupid, awkward, or downright weird. But as Muslims, we should never ever react negatively to a question.

We should empathize with the questioner, and even if the question is worded very badly, or is really harsh, we should still give the benefit of the doubt and try and answer in the best way possible. Allah has blessed us with a beautiful deen. Let us show its beauty through our character and manners as well!

4- Listen Attentively until They Finish

Listening inattentively is something I have been guilty of many times. Always remember to listen attentively to the person asking the question without interjecting or answering them before they have finished.

One of the characteristics of the Prophet that was mentioned was that he would never interrupt someone while they were speaking.

There were times when the non Muslims came and were saying horrible stuff to him, and he still listened attentively and let them finish before giving them a response.

Always listen attentively; it shows the questioner that you really care about their question, and that you are willing to answer them properly. It really helps them feel comfortable as well.

5- Keep Your Ego in Check

In these times, it is easy to get very territorial or harsh. The feeling that we get is good— it is a sign that we still value our faith very highly.

However, we must remember to keep our egos in check. We shouldn’t look down on others or dismiss them simply because we were hurt. We shouldn’t take any of their behavior personally, and should remember to properly call them to Allah regardless of what they say.

This is also seen in the conversation between Moses and Pharaoh, where he absolutely dodged every single personal attack that Pharaoh made, and simply kept calling him to Allah.

6- Start with Talking about Allah and the Basics of Islam

One of the biggest problems we have in our dawah today is that our focus gets lost when questions are asked. When someone asks about hijab we go on a tirade about how it “protects women,” or how it is their “freedom of choice.” When someone talks about Islamic law, we go on about how it is just and right, etc.

The most important thing that we need to remember is this: all of Islam is from Allah, and until someone understands that, nothing will make sense to him.

Whatever question one asks about Islam, the way forward is for us to first say, “I will come to your question, but firstly could I explain to you the basics of Islam?”

This gives us the opportunity to explain the worldview of Islam. People come from various backgrounds. They do not know how Allah wants us to see the world. The very first things that should always be the topic of any answer are the following:

. Explain to them the concept of Allah, and that He is the Creator, and ultimately because He is the Creator, He is the only One who can legislate laws, or give conditions to human life.
. And explain that seeking nearness to Allah is the ultimate purpose of life, and that all that we do as Muslims is done because Allah commanded us to do so.
. Explain that Allah’s commands and prohibitions are detailed in the Quran and through the words of Prophet Muhammad.

If we do not set this base first, it is nearly impossible to give a logical answer to anything else. Once someone understands these principles we can we go on to answer their initial question.

But what if we do not know the answer to the initial question? We just say we don’t know! The importance of these principles is that it helps us give something to the questioner about Islam.

We might very well say, “I don’t know the answer to your question, but I can give you a very basic understanding of what Islam is. And I will get back to you on that question later, would that be ok?”

Imam Malik said, “Saying ‘I don’t know’ is half of knowledge.” Moreover, lying is a terrible sin. Lying with regards to the religion is even worse!

I pray that Allah guides many people to Islam through your hands and makes us a community that lives up to the standards that our deen expects of us.

Please comment on any other principle that you think is very necessary!