In a hadith narrated by Abu Hurairah in Sahih Al-Bukhari, a man came to the Prophet (peace be upon him) and told him:

“O Messenger of God, give me an advice”

The Prophet (peace be upon him) told him:

Do not get angry.

And the man repeated his request two more times, and the Prophet (peace be upon him) gave him the same answer each time he asked the same question:

Do not get angry.

Now first the question is that why specifically that piece of advice?

It could be that since the Prophet (peace be upon him) was a mentor, so he knew that this man in particular needed that piece of advice. Because on different instances, somebody else may come to him with the same question. Somebody actually came to him and said “O Messenger of God give me an advice,” and the Prophet would tell him:

Say I believe in Allah and then hold on to the Straight Path.

So it could be something that this particular person actually needs.

Another reason is that this anger-control becomes a measure. So in other words, if you can control your anger you can control everything else. That’s why the Prophet (peace be upon him) said in another hadith:

So as such, this anger-control can become an indicator of the strength of a person’s personality.

And, subhanallah, the damage or the harmful effects of anger are so many, whether physically, physiologically, or socially because the person actually who gets angry and loses control of course his judgment will be impaired and he may offend people, and then relationships actually get destroyed in the process. We have seen it happen actually on many instances.

Why do People get Angry?

And also sometimes it’s the stress. A person sometimes may go through stressful situations, like sometimes when the person is fasting. Some people become very short-tempered when they fast. That’s why the Prophet (peace be upon him) said that:

If you are fasting and somebody tried to insult you or offend you, you should say I’m fasting.

Even though the person may more easily lose it when he is fasting, but the fasting actually becomes an exercise in patience. So sometimes people may go through certain situations.

This anger might be expressed directly by offending others, or lashing at others. Sometimes a person may repress it in a way, but you will see it actually being expressed in different kinds of ways and relationships. The person contains it but he vents it in a different way.

Those who spend freely, whether in prosperity, or in adversity; who restrain anger, and pardon all men; for Allah loves those who do good. (Quran 3:134)

Those who control their anger, contain their anger but sometimes that is not enough. A person may contain it to express it in a different way or a different time.

That’s why Allah followed that by saying “…and pardon all men” so they contain their anger and they forgive, and even go beyond that in to “for Allah loves those who do good and are kind to each other,” so they go an extra step actually to be kind to others.

I think something which is important when we talk about anger is never for the person never to get angry. There is an interesting saying by Al-Hassan Al-Basry, he says:

“Anyone who is pushed to get angry and he never gets angry is almost like a donkey,” like very insensitive; nothing moves him.

You are playing with the Book of Allah while I’m sitting among you?

Or when certain things happen having to do with the rights of Allah Almighty. But when it had to do with his personal rights, the Prophet (peace be upon him) would give it. 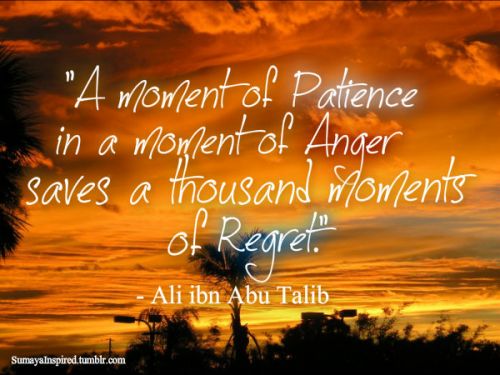 How Do we Deal with that Anger?

The Prophet (peace be upon him) in a hadith narrated by Ahmed said:

When teaching others try to make things easy.

And he mentioned something at the end, he said:

…When you get angry, be quiet.

When you get angry, don’t say anything, because when a person gets angry of course he will not know what he is saying, and the things you say are just out and you can’t take it back in. And of course the damage would already be there.

So, one thing is to make sure that you don’t speak when you get angry.

Another thing that the Prophet (peace be upon him) in a hadith narrated by Abu Dawud said:

If you are angry and you are standing up then sit down, and if you are sitting down lay down on the floor.

Try to imagine a person laying down on the floor and angry at the same time! They don’t go together. But the Prophet (peace be upon him) said it’s just one thing to do.

Of course another thing is to seek refuge in Allah Almighty from Satan.

Now when I’m angry I can’t help it. Well, there is a little bit of margin that we can control and that’s really what we are after. So this margin if you can actually control it and try to contain it that would be good.

When you’re angry, try to look at your own reflection in the mirror. Try to do it. You will be amazed of what you see. You will probably see a different person all together. But look at yourself how you look when you get angry. This in a way will help you try to stay away from that.

Another thing of course is to always keep in mind the reward from Allah Almighty. This is a big motivator as to what we do. Always Allah Almighty will reward the person who does this for His sake.

If things actually didn’t help, maybe you can consider a certain program or course in anger management and relaxation techniques. Those will also be helpful, and they are available everywhere that we look.

Another good training actually is to go to Hajj.

For Hajj are the months well known. If any one undertakes that duty therein, let there be no obscenity, nor wickedness, nor wrangling in the Hajj. (2:197)

If you go to Hajj, and if you are in a state of Ihram, there is no argument in Hajj. Even though everything is going to push you to argue.

You are around three million people doing many things in so many different ways, not in the best way, and at the same time Allah Almighty says don’t argue.

So if you can make it actually out of the Hajj while containing your anger then you can contain your anger everywhere.

We ask Allah Almighty to make us among the strong in this life and in the hereafter.