In Part one, we explored the significant features of the name Islam, making special reference to how the Quran speaks of Islam and being Muslim. We also noted that the word reflects the concept of peace, and that it is a name used right from the start. In this part we shall explain three significant features of the name Islam: a Divine gift, a way of life, and a universal message.

Islam is a universal meaning not bound to any group of people, nor even to any particular figure or event in history.

One may question what the relevance is of showing that the Quran is the source for the name used by Muslims everywhere today in reference to their own identity and way of life, in addition to showing its history as a term used by prophets prior to Prophet Muhammad (peace be upon him).

The fact is that a name is an essential component to identity, and so one should take pride in the virtues embodied in a name that was chosen by the Creator.

The names of certain modern religions were chosen by their human founders, while the older religions tend to have more mystery surrounding the origin of their names. We also find names that were coined by people external to the tradition.

New Testament passages suggest that the first people to use the word “Christian” (or rather, its original language version) were the religion’s critics, but then the term became used by its followers as a badge of honor. (Acts 11:26 and 26:28, and 1 Peter 4:16, New International Version)

Followers of Muhammad have also had various unwanted labels attached to them. Yet none of these was adopted by Muslims in preference to their original name.

For example, “Muhammedan” implies worship of Muhammad in the way that Christians worship Jesus Christ.

Furthermore, while it cannot be correctly said that Jesus was a Christian — or that Jesus or Moses (peace be upon them) taught Christians and Jews to use these names — it is the case that Prophet Muhammad was indeed a Muslim who submitted to God, thus providing the perfect example of a worshiper in front of his people.

Just as the imam (leader of prayer) who leads any congregational prayer will stand ahead of the others but perform the same submissive actions facing the same direction, so did Prophet Muhammad — like those before him — to show all men and women how to worship Allah in all aspects of life. 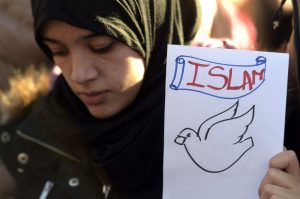 Thus Prophet Muhammad was first in line to submit to Allah, and the foremost in obedience to Him.

Chronologically, he was the first member of the Quranic community to follow its message, but of course, as we have shown in Part one of this series, he was not the first Muslim in history.

Prophet Muhammad was a believer and submitter to God just as his brother-prophets (peace be upon them all), including the Messiah Jesus, and those who followed his way.

A Way of Life

It is worth taking a closer look at the word Islam. What type of word is it? It is a verbal noun, that is, the name for an action, and this fact has its own significance.

It means that Islam as a religion is defined by this act of submission, which goes beyond a single action to being a comprehensive way of life.

When someone becomes a Muslim, the way of speaking about this in Arabic is not to say that she “converted”, or even “reverted” as many Muslims prefer to say. Rather, the word that is used is islam, so it is as though we have said: “Sarah submitted last month.”

This meaning of repentance and conversion is also found in the Quran, such as in the story of the Queen of Sheba, and the Bedouin Arabs. The People of the Book, namely Jews and Christians, are addressed with an invitation to “submit“, meaning to recognize the last Prophet, Muhammad, and live by the law revealed to him.

Studying the etymology of the names of world religions, it becomes clear that many have been named in one way or another after their followers.

For example, “Judaism”, the religion of the Judaic people, derives from Yehudah (Judah), the fourth son of Jacob, and thus one of the Israelite tribes. Since Judah is not considered a founder of the religion in the way that Moses is, the use of his name is actually due to various political and historical factors.

Even Christianity, with its linguistic connection to Christ, derives from the name of the Christians, rather than the other way round.

Muslims, on the other hand, take their name from Islam. They are named by the action that defines them: their submission to God, manifested in absolute monotheism as well as belief in the final Prophet and the Quran.

It follows that Islam is a universal meaning not bound to any group of people, nor even to any particular figure or event in history. It is another word for true religion itself, and is the direct relationship between any worshiper — human, animal or even inanimate — and the only Being worthy of worship: Allah. 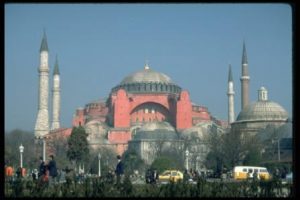 Thus everyone who believes that submission is the duty of all creatures towards their Creator will strive to perfect his or her islam (small-i) even if he or she is not among those who have chosen to follow the guidance brought by Prophet Muhammad, the last in the line of prophets teaching and exemplifying this submission.

When Muslims invite others to their religious path, they are inviting neither to something strange or novel, nor to an exclusive club. It is the revival of the human spirit, the echo of the prophetic call.