These hypocrites built a Masjid next to the Masjid in Quba’, and they finished building it before the Messenger went to Tabuk.
aaa

Masjid ad-Dirar was a mosque built in Madinah by a monk named Abu Amir and some hypocrites. It was built close to masjid Quba’ with the intention of mischief and plots to disuniting the Muslims.

After it was built, Abu Amir invited the Prophet to pray in it. The Prophet accepted the invitation and promised to pray in it after he’s back from his journey.

When the Prophet returned from his journey, Allah exposed the hypocrites’ plots and informed the Prophet about their hypocrisy and ill intentions. So He prevented him from praying in it. Thus the Prophet ordered the companions to burn it down.

And [there are] those [hypocrites] who took for themselves a mosque for causing harm and disbelief and division among the believers and as a station for whoever had warred against Allah and His Messenger before. And they will surely swear, “We intended only the best.” And Allah testifies that indeed they are liars.

Do not stand [for prayer] within it – ever. A mosque founded on righteousness from the first day is more worthy for you to stand in. Within it are men who love to purify themselves; and Allah loves those who purify themselves. (Quran 9:107-108)

We leave you with quotes of some scholars narrating the story:

“The Messenger of God proceeded until he halted in Dhu Awan, a town an hour’s daytime journey from Medina. The people who had built the Mosque of dissent (Masjid ad-Dirar) had come to him while he was preparing for Tabuk, saying:

‘O Messenger of God, we have built a mosque for the sick and needy and for rainy and cold nights, and we would like you to visit us and pray for us in it.’

[The Prophet] said that he was on the verge of traveling, and was preoccupied, or words to that effect, and that when he returned, God willing, he would come to them and pray for them in it.

When he stopped in Dhu Awan, news of the mosque came to him, and he summoned Malik b. Dukhshum, a brother of the Banu Salim, b. Awf, and Ma’n b. Adi, or his brother Asim b. b. Adi, brothers of the Banu al-Ajlan, and said:

‘Go to this mosque whose owners are unjust people and destroy and burn it.’ They went out briskly until they came to the Banu Salim b. Awf who were malik b. Al-Dukhsum’s clan. Malik said to Ma’n,

‘Wait for me until I bring fire from my people.’

He went to his kinsfolk and took a palm branch and lighted it. Then both of them ran until they entered the mosque, its people inside, set fire to it and destroyed it and the people dispersed.

Concerning them it was revealed in the Quran:

And those who have taken a mosque for [working] mischief and disbelief, as well as disunion among the faithful and as an outpost for those who already fought God and His Messenger, will swear, ‘we desired nothing but good.’ God witnesses what sort of liars they are. (Quran 9:107)

“And, among them, those who have chosen a mosque — these were twelve men from among the hypocrites — by way of harm, to cause distress for those of the mosque of Quba’, and disbelief, since they built it on the orders of the monk Abu ‘Amir, as a sanctuary for him, so that whoever comes from his side may stay there: he had gone to the Byzantine Emperor (qaysar) to bring troops to fight against the Prophet (s), and to cause division among the believers, who pray in the mosque of Quba’, by having some of these pray in their [the hypocrites’] mosque, and as an outpost, an observation post, for those who waged war against God and His Messenger before, that is, before it was built — meaning the above-mentioned Abu ‘Amir — they will swear:

‘We desired nothing, by building it, but, to do, good’, by way of kindness towards the poor in times of [heavy] rain or [extreme] heat and in order to provide [a place of worship] for the Muslims; and God bears witness that they are truly liars, in this [claim of theirs]. They had asked the Prophet (s) to perform prayers in it.”

The reason behind revealing these honorable Ayat is that before the Messenger of Allah migrated to Al-Madinah, there was a man from Al-Khazraj called “Abu `Amir Ar-Rahib (the Monk).”

This man embraced Christianity before Islam and read the Scriptures. During the time of Jahiliyyah, Abu Amir was known for being a worshiper and being a notable person among Al-Khazraj. 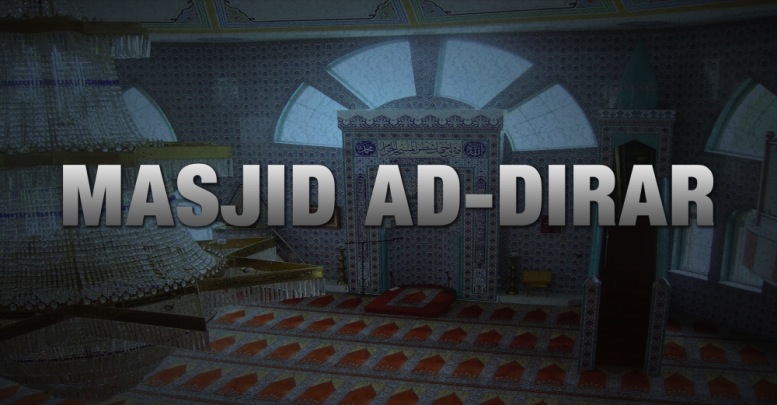 When the Messenger of Allah arrived at Al-Madinah after the Hijrah, the Muslims gathered around him and the word of Islam was triumphant on the day of Badr, causing Abu `Amir, the cursed one, to choke on his own saliva and announce his enmity to Islam.

He fled from Al-Madinah to the idolators of Quraysh in Makkah to support them in the war against the Messenger of Allah.

The Quraysh united their forces and the Bedouins who joined them for the battle of Uhud, during which Allah tested the Muslims, but the good end is always for the pious and righteous people.

The rebellious Abu Amir dug many holes in the ground between the two camps, into one of which the Messenger fell, injuring his face and breaking one of his right lower teeth. He also sustained a head injury.

Before the fighting started, Abu Amir approached his people among the Ansar and tried to convince them to support and agree with him. When they recognized him, they said, “May Allah never burden an eye by seeing you, O Fasiq one, O enemy of Allah!”

They cursed him and he went back declaring, “By Allah! Evil has touched my people after I left.”

The Messenger of Allah called Abu Amir to Allah and recited the Qur’an to him before his flight to Makkah, but he refused to embrace Islam and rebelled. The Messenger invoked Allah that Abu Amir die as an outcast in an alien land, and his invocation came true.

After the battle of Uhud was finished, Abu Amir realized that the Messenger’s call was still rising and gaining momentum, so he went to Heraclius, the emperor of Rome, asking for his aid against the Prophet.

Heraclius gave him promises and Abu Amir remained with him. He also wrote to several of his people in Al-Madinah, who embraced hypocrisy, promising and insinuating to them that he will lead an army to fight the Messenger of Allah to defeat him and his call. He ordered them to establish a stronghold where he could send his emissaries and to serve as an outpost when he joins them later on.

At-Tabari, The Last Years of the Prophet.