Arguing is disliked and although your intentions may be good in the purpose of spreading knowledge, it is very important to do so in a peaceful way
aaa

“He who gave up disputing while he is right, a palace of high rank in Paradise will be built for him.

He who gave up disputing while he is a fabricator, a palace in the centre of Paradise will be built for him.” (At Tirmidhi)

The Hadith is teachings of Prophet Muhammad (peace be upon him) that he encountered throughout his prophecy.

They are phenomenally important in the lives of Muslims and we are encouraged to implement his teachings in our daily life. Prophet Muhammad is said to be the best of mankind, and as Muslims, we should aspire to follow him.

I’ll begin by interpreting the above hadith into simple terms. If you are arguing with another person over religious issues and you back down, then Inshallah you will get a palace in a high rank of Paradise, and even if you are arguing with things that you have made up and you back down, God will reward you with a palace in the centre of Paradise.

This hadith demonstrates how merciful and generous our Creator truly is. This hadith is very important in how you conduct yourself as a Muslim; you must remember that manners are fundamental in Islam. When in public, you must remember that people will be judging your behaviors, so therefore it is important to set a good example of how Muslims are and show the true peace of Islam.

When you become a revert, it is not uncommon to have a rush of faith and such strong beliefs that sometimes you cannot help but contest anyone who says the contrary to what you believe.

This rush of faith is a very positive attribute to becoming a new Muslim, but don’t let it become a negative attribute as narrated in the hadith by Prophet Muhammad. Arguing is disliked and although your intentions may be good in the purpose of spreading knowledge, it is very important to do so in a peaceful way; in Islam backing down is better. 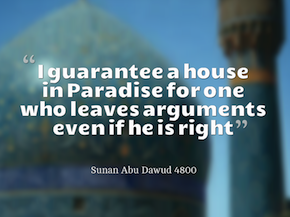 I remember after becoming a Muslim, my faith was so strong, but I let that positive change in my life almost become negative. I would become very defensive if a person asked me questions about my religion, I would answer abruptly almost frightening them.

If your intentions are to spread knowledge about Islam, try to be more inviting and less defensive, as I often found this undoubtedly pushed people further away from Islam. I feel that although now I regret becoming so defensive and argumentative, I can understand how it became so easy for me and many others to fall into that pattern.

I think it is fair to say that as a new Muslim, although you feel strong in faith there is always the fear that if you don’t defend yourself then you will fall back to your old ways. Restraining from arguing becomes particularly hard when trying to address the matter of your conversion with family members especially if they are not very open minded about Islam.

On many occasions, I have become intensely frustrated with my family when discussing my belief in ‘Allah’, I have tried to put it to them in a calm way but it often fell on deaf ears. The more my frustrations grew, the more I became argumentative. My family would make false accusations about Islam, such as women being oppressed or being forced by their husbands to wear hijab. I would always push and push until they accepted my belief or they backed down, and this is not what Prophet Muhammad or God wants us to do.

Also be aware that I understand how hard and pressured you may feel when being out on the spot by family members asking questions about Islam, but as the hadith says if you do not know the answer do not fabricate as your honesty will merit more reward from God, simply apologize and say that you do not know.

On a separate occasion, I was walking through town with a friend when I saw a crowd of Muslims around a preacher. I went to listen on the conversation and this preacher was a Christian man who had very strong views about Muslims and Islam and was making all sorts of wild and disrespectful accusations. At that time in my life I was unaware of the above hadith and therefore had no knowledge or understanding on the rulings of arguing.

The argument lasted an extreme two hours where the man incessantly insulted Islam, Allah and His Prophet because he could not justify the answers that I was giving him from the Quran. At that time I was angry and I felt that it was my duty as a Muslim to defend my religion, but I wasn’t aware how quickly my defense became an argument. The man made a disgusting accusation about Prophet Muhammad, and at this point I realized that this man was so lost in the world of non-believers that he would only find Islam through the Will of God, not by my arguing.

As a result, I walked away but had I known about this hadith sooner, I would never have given the preacher the time of day. I know the truth and I believe in God and arguing isn’t part of that peace I find with God.

Subhanallah, I wish that at the time of my conversion I would have been more aware of the above hadith as it could have prevented many hurtful arguments for me and my family members.

Personally, I believe that to be a bigger person is to perfectly represent this hadith. That doesn’t mean to be bigger in sense of pride or knowledge, but to back down in an argument, to be humble and pious and to apologize if needed.

Ask yourself this question always before an argument: Who are you trying to prove yourself to?

Know that God knows what is in your heart and what you truly believe, that you yourself know what you believe is the truth, so who else matters?

Although family is an extremely important part of Islam, you do not have to prove yourself to them; this hadith is saying that if you know that what you are saying is true then the argument is unnecessary. God will reward your patience more than He will do in your argument.

I pray that you all find this helpful in your faith and journey to and on Islam, that this hadith guides you and provides you with inspiration and a goal to achieve in the afterlife.