About 4,005 tonnes of food go to waste every day during the month of Ramadan. — Malay Mail file pic
aaa

The Solid Waste and Public Cleansing Management Corporation (SWCorp) in Malaysia has discovered that 4,005 tons of edible food are thrown away daily in landfills during Ramadan, Malay Mail reported.

The counted daily measures make up 120,000 tons of food waste for the entire holy month and are equivalent to about 343 million packs of medium-sized main dish meal.

SWCorp’s report found that every year, during festive seasons such as Ramadan, tons of food end up in the dustbin, and this year is no exception. Moreover, the numbers are bound to increase 15 to 20% every festive season.

The statistics for this year’s ongoing Ramadan aren’t final yet, but according to Taha “based on the trends since 2016, the numbers are expected to increase for each state, especially in the capital city Kuala Lumpur.”

He also highlighted that “food leftovers make up 44.5% of the solid waste composition, which has an environmental, economic and religious impact. These leftovers that end up in landfills produce a large amount of leachate and methane gas that’s harmful to the environment.”

Taha added that “treating or reducing food waste onsite avoids the increased production of CO2 from transportation and methane, leachate, and potential pollutant runoff into local water sources at landfills.”

SWCorp’s official also pointed out that food waste management comes with a hefty price tag, which puts a strain on the economy. “We must keep away from the habit of wasting food because the habit isn’t the practice of any religion and it will also be detrimental to ourselves,” he said. 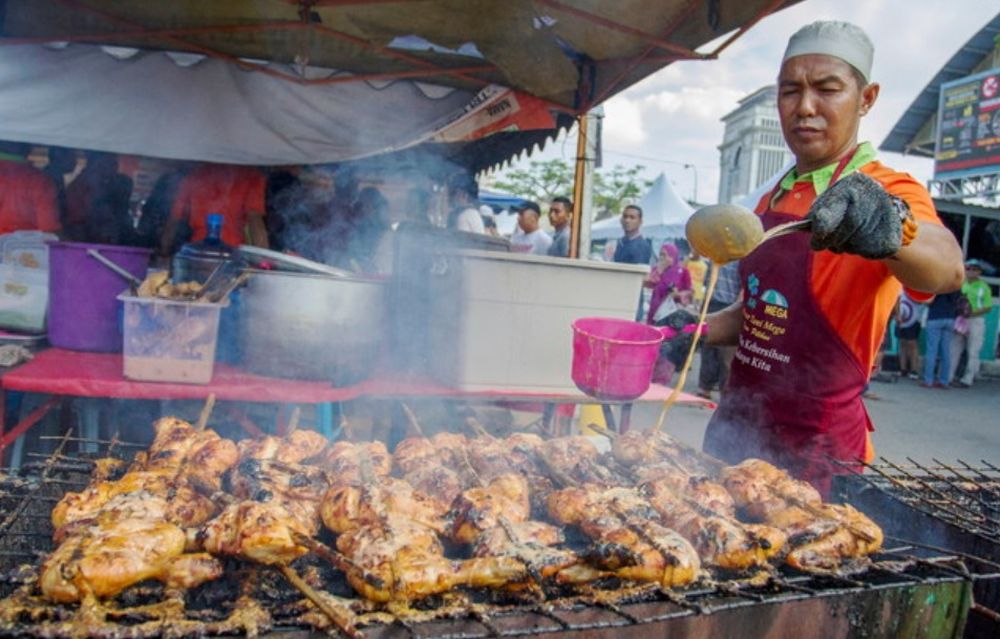 SWCorp’s ‘Love Food Hate Waste’ at Ramadan Bazaars aims to save the excessive food by channelling them to the needy. — Bernama pic

The Qur’anic verse number 31 of the 7th chapter, Surat Al-Aaraf, says: {O children of Adam, take your adornment at every mosque, and eat and drink, but be not excessive. Indeed, He likes not those who commit excess.}

In fact, Islamic Shari’ah calls for balanced diets and prohibits excessiveness. Miqdam ibn Ma’d reported that Prophet Muhammad (PBUH) said: “The son of Adam can’t fill a vessel worse than his stomach, as it’s enough for him to take a few bites to straighten his back. If he can’t do it, then he may fill it with a third of his food, a third of his drink, and a third of his breath.” Source: Sunan al-Tirmidhī 2,380 Grade: Sahih (authentic) according to Ibn Muflih.

To help combat the issue, Taha said SWCorp has initiated a Food Waste Reduction program dubbed “Love Food Hate Waste” at Ramadan bazaars in every Malaysian state where it “aims to study the amount of food surplus from Ramadan bazaars and save the excessive food by channeling them to the needy, underprivileged undergraduates and homeless students.”

Taha advised the public to stop over-spending on food and plan their meal according to their needs. “Store your food correctly because improper storage leads to a massive amount of food waste.”

He called for public awareness on the issue as “powerful social media campaigns and media influencers are seen to have the highest impact on the people nowadays. If more people get the message, food wastage can be reduced significantly. To do so, numerous local celebrities and activists have been actively creating awareness about food waste in many ways.”