Editor’s Note: AboutIslam could not verify the authenticity of the claim that the cloak belongs to Prophet Muhammad (peace be upon him).

A family as old as Islamic history itself has been looking after what’s believed to be Prophet Muhammad’s cloak since the 7th century as they keep it at a 160-year-old mosque in Istanbul’s Fatih district, TRT World reported.

“Every year, more than a million people visit the mosque during Ramadan. We had 20,000 visitors on a recent Sunday,” said Sumeyra Guldal, General Secretary of Hirka-i Sharif Mosque Foundation, which looks after the place of worship.

Hirka-i Sharif Mosque is shaped like an octagon to represent the number of pieces that make up the cloak and is designed in such a way that people are able to walk through corridors to see the cloak on its upper floors without disturbing prayers downstairs.

“In just three weeks we’ve more visitors than many of the other museums in Turkey,” informed Guldal who also mentioned the family of Hazrat Owais Qarni, a contemporary of Prophet Muhammad, who was gifted the cloak by him.

For 13 centuries, from one generation to the next, the family has been safeguarding the precious artifact.

Baris Samir, the 59th descendant of Owais Qarni said: “Since I was three or four years old, I’ve been at the mosque. I’ve seen how possessive my family has been about the cloak and also its willingness to allow people to visit it.” 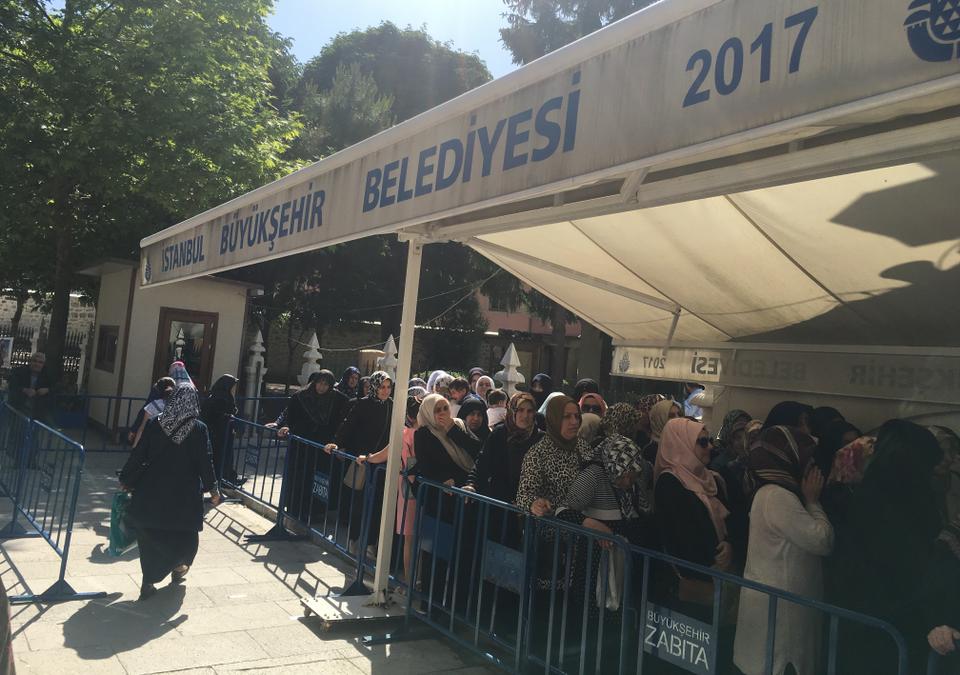 People line up to see the scared relics kept at the Hirka-i Sharif mosque. (TRTWorld)

Owais ibn ʻAmir ibn Harb al-Qarni, born in 594,  is regarded as a companion of Prophet Muhammad, peace and blessings be upon him, even though they never met. A native of Yemen, Qarni set out to Madinah to see the Prophet but had to return to take care of his ailing mother.

Upon hearing the news that a man had come to meet him, but had to rush back –  without meeting him – because of his mother, the Prophet asked Umar ibn Al-Khattab and Ali ibn Abi Talib (may Allah be pleased with them) to grant him his cloak.

Like many historical figures, the tomb of Qarni is believed to be in Al-Raqqah, Syria, but, other purported burial sites are also mentioned to be located in Oman and Pakistan.

In 657, Qarni fought with Ali ibn Abi Talib (may Allah be pleased with him) against Muʻawiyah ibn Abu Sufyan in the Battle of Siffeen where he died as a martyr, as reported by Ibn Battuta.

Since then, Qarni’s descendants have been the custodians of the famous golden-colored fabric. The family lived in Iraq until the 8th century when they were forced to move to Western Anatolia, thus settling in the picturesque Aegean town of Kusadasi.

“We have no documents, explaining why we came to Kusadasi. It appears that the family saw it as safe and decided to settle here away from the prosecution of the Umayyad caliphs. Our family stayed there until 1611,” Samir said.

In 1611, Ahmet I, the Ottoman caliph at the time, heard about the cloak and decided that he must have it. But his advisors and the scholars strongly advised against it, saying it would be a violation of Prophet Muhammad’s wish. So, he ended up inviting the family to live in Istanbul.

For centuries, the family have allowed people to view the cloak every Ramadan, but as its popularity grew and attracting more visitors, it weighed a bit more on the cost and management; thus, Sultan Abdulhamid I, who ruled the Ottoman Empire in the 18th century, eventually built a small building to house the cloak in Fatih.

“That place wasn’t also big enough for the increasing number of visitors. This time Sultan Abdulmajid ordered to build a mosque and a circle of Hirka-i Sharif beside the mosque. The cloak has been here since 1851,” Samir explained.