The most important Islamic events during this month is the birthday of Prophet Muhammad (PBUH). Although the exact date is unknown, the majority of Muslims believe the birth date of the Prophet (SAW) occurs on the 12th of Rabi’ Al-Awwal .

The Hijri Calendar is a lunar one meaning that months begin when the first crescent of a new moon is sighted. And since this type of calendars is 11 to 12 days shorter than the solar year, Rabi’ Al-Awwal and all Hijri months migrate throughout the seasons.

The Astronomical New Moon (conjunction) is on Tuesday, November 29, 2016 at 12:18 UTC. On November 29, the moon may be seen in the continent of North America by telescope only. 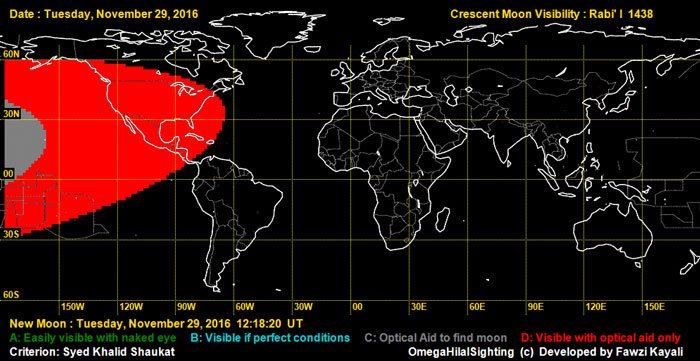 On Wednesday, November 30, it may be seen with difficulty in the majority of the Muslim World, as well as Europe and South Africa. On Thursday, December 1, it may be seen in almost the whole world. This means that the month of Safar will be 29 days only, ending on Tuesday, the 29th of November 2016, while the new month Rabi’ Al-Awwal will start on Wednesday, the 30th God Willing.