WINDSOR – A group of Muslim community leaders in Windsor penned a letter asking police why Islamic-themed hate graffiti is not treated as a hate crime, even though it targets a certain group because of their faith.

“These statements play on the irrational fear of Islam as vindictive and un-Canadian.”

The letter was penned by Ahmed Khalifa, who gathered signatures from the Imam of the Windsor Mosque, representatives of the Windsor Islamic Youth Council, and other community members.

It also highlighted Muslim fears that these hate messages might affect other people who could be “influenced and emboldened by the misinformed messaging of the vandalism.”

The messages might also affect the relationship between the police service and Muslim community which “will suffer if the impact and intent of these incidents are not recognized.” 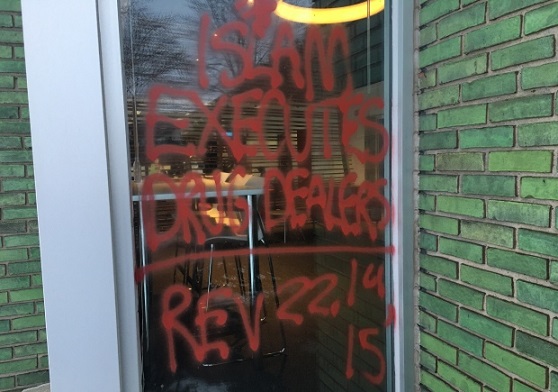 Islamic-themed graffiti on the windows of CBC Windsor. (Marine Lefevre/CBC)

The Muslim leaders’ letter followed the arrest of a 49-year-old man in December, who was charged with 16 counts of mischief for painting messages, including the words “Sharia now” and “Islam executes drug dealers” at bus shelters and on the windows of CBC and other media organizations across the city.

“I see it as more of strengthening the communications, strengthening that tie with the Windsor Police Services and the Muslim community,” Khalifa explained, after delivering the letter to police Wednesday.

As the graffiti targeted only Muslims, Khalifa said this strengthens claims the incidents could be a hate crime.

“It was clearly targeting an identifiable group in Windsor which is the Muslim community and it consists of 25,000 people in the city so that is a sizeable group in the city the felt targeted.”

Windsor police commented on the letter saying that hate crime charges are still possible in connection with the latest spree of Islamic-themed graffiti sprayed across Windsor.

“A hate crime actually requires the consent of the attorney general for any proceedings,” explained Sgt. Steve Betteridge.

“That file has been sent to the crown for review and the crown is responsible for screening files and it’s within their discretion to recommend charges only in circumstances where they deem it appropriate.”