WINDSOR, Ontario – People of different faiths and cultures in Windsor, Ontario, came together on Sunday, September 24, to socialize and eat hummus at the city’s first Hummus Festival.

“A lot of people came out, and so there’s a lot of support from the community,” Ameen Fadel, the founder, and CEO of Cedar Valley Selections, told CBC on September 23.

Sunday’s event was held thanks to cooperation between Windsor Islamic Association and Catholic Central High School, where the event was held, and Windsor Jewish Community Center.

Following a blind tasting, judges decided on Cedar Valley as the winner.

“We have some of the best hummus in town being served up,” said Jay Katz, the executive director of the Windsor Jewish Community Center.

Eddy Hammoud of Eddy’s Mediterranean Bistro praised the idea of the festival as an opportunity to bring people together.

“One beauty about food is that it brings cultures together,” he said.

“It’s nice simple food. You can use it in any occasion, parties, dinner, nice little dip. Mix it with a different type of things to eat it with, vegetables, bread, chips, you name it.” 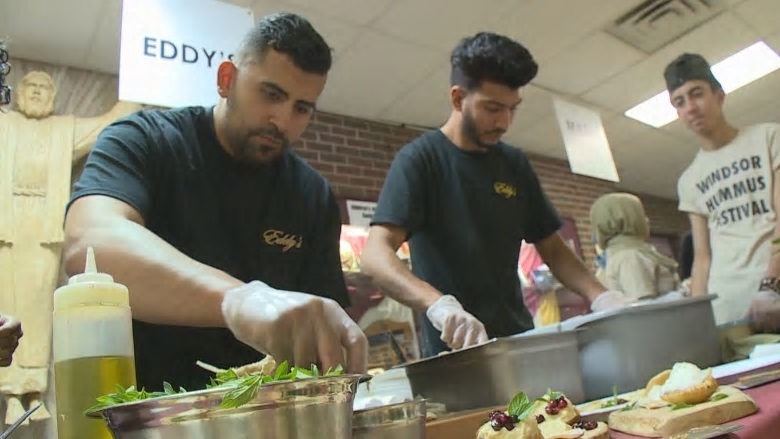 Vladimir Martiniz, who came to the festival to support his daughter, shared a similar opinion.

“The music is good, the food is great, and the people are fantastic, so we’ve been having a lot of fun here,” he said.

“I think it’s a good activity, and I hope that it continues, And I think it brings people together.”

Katz was delighted by the turnout and said that the response from the public has been positive.

“They’re loving it. They love hummus. They think it’s a great idea. They’re glad we did this. They’re happy to be here,” he said.

“The community is designed to have an event like this. Windsor is a very congenial, friendly place. We all know people from many diverse backgrounds of our own. We all get along very well.”