SAN PEDRO SULA – As churches dominate the sky in Honduras, a sky-blue worship house in the northwest San Pedro Sula, and one of just two in the central American country, draws a diverse range of Muslims coming from long distances every week.

“We used to pray in a room close to the hospital,” Arnaldo Hernandez, a Garifuna fisherman, told Atlas Obscura after Jumu’ah.

Hernandez drives three hours from his home in the coastal town of La Ceiba to attend Friday prayers.

He converted to Islam from Christianity 26 years ago, though, as he is quick to point out with a huge grin, “we are all Muslims.”

For many years, Honduras was the only Latin American country without a mosque—despite the fact that up to 25 percent of San Pedro Sula’s population is of Arab descent.

Now, there are two: the one in San Pedro Sula, and a smaller one in the capital city of Tegucigalpa.

According to Pew Forum’s 2009 report, Muslims numbered about 11,000 individuals out of Honduras’s nine million population.

Praying is one of Islam’s Five Pillars that is obligatory for every Muslim above seven years old. There are five daily obligatory prayers which the Muslim can perform at any clean place. Though, praying at a mosque in a group of worshippers is more rewardable.

The Friday prayer is held weekly at mosques just after noon in replacement of the Zuhr prayer which is normally one of the five obligatory daily prayers.

Muslims in areas with no mosques can pray together anywhere that is clean; it’s not mandatory to travel long distances to attend the Friday prayer at a mosque. Similarly, sick Muslims are allowed to pray at home. 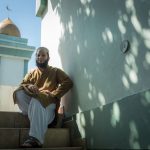 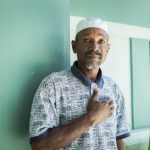 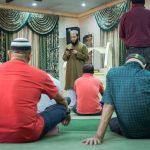 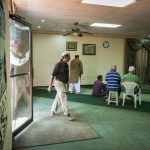 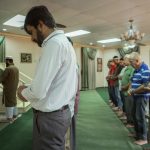 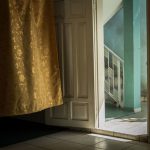 Roots of Islam in Honduras

Rodolfo Pastor Fasquelle, a historian at San Pedro Sula’s Museum of Anthropology and History explained that Christian Arab migrations came in three waves: from 1895-1915 as the Ottoman Empire was collapsing; from 1925 to 1940 in the wake of the First World War; and again from 1950-1970, after visas became easier to obtain.

“The first two waves of migration were mostly comprised of Christian Arabs; only 15% of these immigrants were Muslim Palestinians,” Fasquelle continued.

One of the native Honduran Muslims, Colonel Orlando Ajalla Gaños, said: “I started studying Islam alone, and the path of Allah came for me.”

Raised Catholic, Gaños has spent the last nine years commuting weekly to San Pedro Sula mosque from Tegucigalpa. “I was always happy but since becoming Muslim I am even happier.”

Honduras’s constitution protects freedom and practice of religion—though the government only officially recognizes the Roman Catholic church; all other religious groups are categorized as religious associations and have fewer rights and privileges.

“We haven’t had any problems with racism,” stated Imam Mohammed who gives the Friday prayer sermon at the mosque in Spanish and Arabic languages.

Hernandez, the Garifuna fisherman expressed that “there’s no distinguishing between race and color. We’re all brothers, that’s the base of Islam. It’s a benediction to have this community.”