Johnson-Harrell won a seat in the Philadelphia 190th district through a special election–garnering sixty-six percent of the vote.

“Despite the US government being secular, the freshman representative espoused that the founding fathers “sought after you and fasted and prayed for this nation to be founded on your principles, your words and your truths.”

“Lord, thank you that he stands beside Israel, unequivocally” and “we’re blessed that we stand by Israel.”

She ended with a plea to overcome evil and that “at the name of Jesus, every knee will bow, and every tongue will confess Jesus that you are Lord.” An objection from a representative can be heard in the background.

Johnson-Harrell expressed shock at the offensive tone of the invocation.

“I knew I was going to receive some discrimination because of my religion because I am a hijabi woman…but I did not think it would come on the actual day of my swearing-in.”

In a response video, Johnson-Harrell said, “I think it was a political radical statement masked as a prayer.”

Faith as a Weapon

US Muslim women responded to Borowicz’s use of faith as a weapon.

“It concerns me that an elected official would have such a fire and brimstone invocation, as if electing a Black Muslim woman is a sin that this nation should atone for,” Margari Aziz told AboutIslam.

“I wish I could say I was surprised. I wasn’t, said Philadelphia resident Aliya Khabir. “Although Islam is widespread in Philadelphia, majority African American, we are well aware that between Philadelphia and Harrisburg, there is Alabama—a common saying referencing how incredibly contrast the experience is for Black people in these two areas.”

Khabir provided another example of Muslims being targets of Christian vitriol in public gathers.

“I’ve witnessed this kind of behavior plenty of times, mostly at the funerals of non-Muslim family members. The speaker–usually the pastor–looks out from the podium and spots a pocket of 10 or 20 Muslim family members and friends present in the church. So, he has to lay it on think to let these ‘Muuuuuzlums’ know he means business.” It’s offensive because it’s not the time for religious debate.”

The irony that the state representative attempted to use Jesus’ name as a religious weapon against a Muslim did not go unnoticed.

“I think that Jesus’s status within Islam makes Rep. Borowicz’s comments all the more comical,” Erinn Corbett-Wright, Board member She Can Win PAC told AboutIslam.

“While Muslims do not worship Jesus as a deity, we certainly revere the example he set and consider his message of the Injeel (Gospel) to be along the continuation that ultimately blessed humankind with the Qur’an. So, in short, praising Jesus has never offended me.”

“I thought it was offensive that she would use her own prophet or who she believes is the ‘son of God’ to attempt to insult others,” said Khabir. In my opinion, it’s the complete opposite of ‘what Jesus would do.’ Not very Christ-like at all.

In a separate video, Rep. Ed Gainey called for mutual respect. “As a Christian, I believe in Jesus, but at the same time, I believe that everyone has a right to their own religious belief.”

“I thought that her comments would backfire with regard to her intent—to incite fear and remind Movita of her ‘place’ in the House of Representatives,” said Corbett-Wright.

“Her comments have actually propelled Rep. Johnson-Harrell to the forefront and the cries of outrage and refutation of such loaded comments have drowned out her dog-whistles of racism and Islamophobia.” 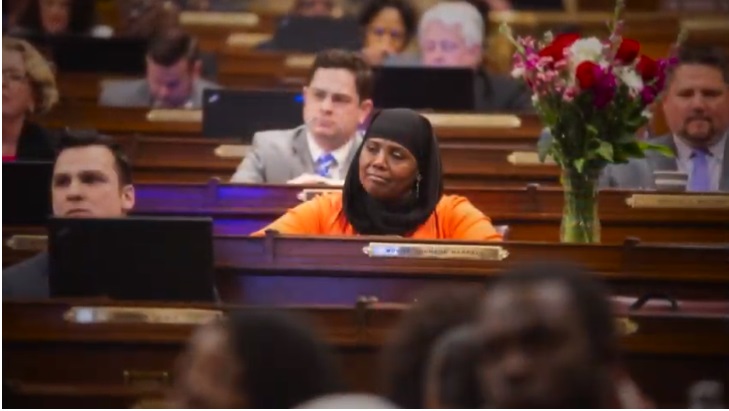 Being Black and Muslim

Johnson-Harrell’s Black, Muslim, and woman identities add complexity to her being the target of what some considered “layered racism and Islamophobia.”

“I take exception to the notion that we have to be scared back into our place. There is a particular subtlety to the Black Muslim woman experience in America—especially a woman who proclaims to have experienced economic inequality, food insecurity and a litany of other issues—being ‘spooked’ before even formally assuming office.”

“The mere appearance of Movita incited such fear, such a dread of the influence and power that a Black Muslim Woman would add to the General Assembly, that it excites me to see how Rep. Johnson-Harrell capitalizes on that energy legislatively.”

“Movita will be fine,” said Khabir. “Trust me she is not shaken at all by this. She’s been through worse.”

“I bask in the glory of knowing that the sight of 55 guest present, the majority of them being Muslim, triggered [Rep. Borowicz] so badly.

“People tend to try to associate the khimar/hijab with oppression. I have always seen it the other way. The khimar/hijab has made Muslim women the most powerful women in the world.  Only the mere sight of a woman in hijab has the power to cause such ruckus and send a complete and utter bigot into a long, drawn out, insincere praise of Jesus, Trump and apartheid-supporting Israel.”

“Indeed, Representative Borowicz has me straightening my crown, flipping my khimar, claiming my time and my power.”