Artist activism is a crucial part of consciousness-raising efforts about a myriad of global issues. Muslims with the ability to convey their activism through the arts dually benefit society by increasing awareness of pertinent issues and availing audiences the chance to observe and enjoy their artistry.

Abdulaziz took the photos during a five-year global tour, where he photographed the numerous ways people collect and utilize water in nine different countries, including Brazil, Nigeria, Pakistan, India, China, and most recently, the United States. He cites the need for the world to develop a better understanding of the challenges so many face in acquiring clean drinking water as his motivation.

“Water is one of the great challenges of our time. Across the planet, we are seeing our fundamental relationship with water called into question,” he told AboutIslam.net.

“Our most critical resource for life on this planet hangs in a delicate balance: between growing populations and energy demands, between rising seas and melting ice, and between those who have access to clean water and those who do not.

“Photographs have the capacity to bring into focus our place in the world, where this imbalance between water and civilization may be explored in the hope we may look upon ourselves and our world not as separate entities but as one whose future is intrinsically linked,” he added. 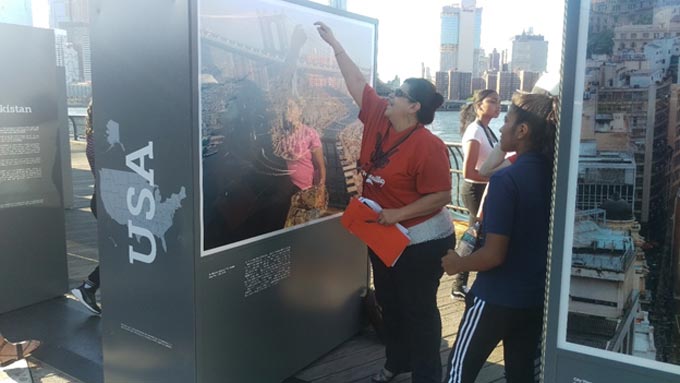 “It is my honor to bring this exhibition back to where it all began for me and to work alongside NGOs and people who care passionately about finding answers to the question of water.”

Water Stories is co-sponsored by the HSBC Water Program, a partnership between HSBC, Earthwatch, WaterAid and the World Wildlife Fund.

“Powerful photos like these taken by Mustafah Abdulaziz compel each of us to acknowledge just how vulnerable we really are, says Sarina Prabasi, CEO of WaterAid about Abdulaziz’s photos, “we are reminded time and time again that access to clean water is under threat in every corner of the globe.”

Through his project, Abdulaziz also demonstrates the significance of water to Muslims around the world. As a fundamental part of various acts of worship, water is a precious commodity for the physical and spiritual vitality of adherents to many world religions.

“When thinking of water, we often don’t realize it’s importance in the rituals and religions of our planet. The concepts inherent in water are clear: purity, rejuvenation, renewal. The religions of the world all incorporate these notions into the very fabric of their beliefs. What fascinates me is the common need, regardless of faith, inherent in water.” 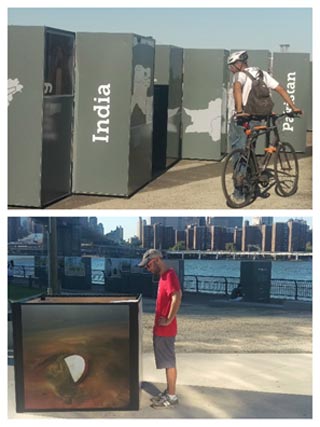 Visitors walking through the monumental exhibition were visually-riveted to the displays. While traversing between the light boxes, I frequently heard people say “stunning,” “beautiful” and “I didn’t know it was this bad.”  Photoville tour guides explained Abdulaziz’s photos to visitors, but there were also many who just spent time individually absorbing the intensity of the pictures.

Mustafah Abdulaziz used his creativity to convey an imperative message about the critical circumstances of water supplies worldwide.   He also exemplifies Muslim artists using the talents Allah provided them to engage in global discussions about social issues like conservation and sustainability.

Water Stories: The Global Crisis in Pictures is on display at Brooklyn Bridge Park, DUMBO, New York City until October 22, 2016.