“Muslims generally are people of peace, those people who are really subscribed to Islam according to Islam,” Zaki Abdul from East Harlem told WNYC News.

“People should see that.”

The event started on Madison Avenue and 38th Street where dozens of men, women and children performed a prayer.

Sunday’s event was the 31st Annual United American Muslim Day Parade, the event that has been taking place since 1985.

Scores of revelers, many waving American flags and clutching flowers, marched down the iconic avenue to 24th Street. 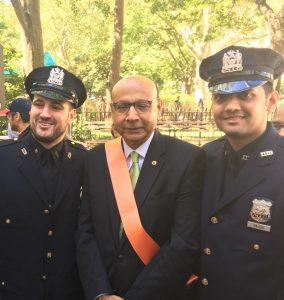 Officers from the #109pct at the Muslim Day Parade with Mr. Khizr Khan, father of fallen soldier Capt. Humayun Khan

Attendants included Khizr Khan, the father of late Army Capt. Humayun Khan who was killed by a suicide bomber in Iraq.

Khan served as the grand marshal for the parade, according to the parade Facebook page.

Parading on Sunday, New York Muslims wanted to show there’s no contradiction between being a good American and a good Muslim at a time when some people are conflating the actions of terrorists with Islam.