Standing up for America’s Principals

Taking this stance for America’s constitutional principles and the country’s propagated ideals has been a Muslim trait for decades, but even more so since 9/11. On the individual level, Omar Suleiman and Linda Sarsour are probably among those symbolizing this best. Sulaiman is an American Muslim scholar and political and civil rights activist.

Believing correctly that “America is a work in progress,” he has recently been honored by the Antiracist Research and Policy Center at American University and the Frederick Douglass Family Initiatives for his work that “embodies Douglass’s enduring legacy of social change.”

Like Suleiman, Sarsour is also a political and civil rights activist.  Her name resonates with progressives across the country, most notably because she served as co-chair of the 2017 Women’s March. In this role, she was included in Time Magazine’s “100 Most Influential People” in 2017. Both of these Muslim activists have risen to prominence nationally precisely because their concerns pertain not only to Muslims, but to the nation as a whole. Their work has occurred in the areas of immigration policy, mass incarceration, mass shootings, Black Lives Matter, that fate of DACA recipients and many social justice issues.

It should not be surprising at all that Muslim Americans have become the defenders and the embodiment of American rights and purported American values. They themselves, or at least their families, often have their origins in countries with autocratic rulers (various of them supported by the US).

It is because of these experiences that they bring a deep understanding and genuine appreciation for freedom. They know how compromised political parties can become and how morally bankrupt corrupt leaders can be or become. Muslim Americans are a necessary corrective and antidote to our naïve and often undue deference to the president and elected officials anywhere.

Today we are in a state where too many political entrepreneurs, but chiefly those on the right, have a default amount of unscrupulous demagoguery to them. They will continue with their willingness to undermine the American Constitution and they will also continue chipping away at American values. Many glaring examples occur all the time. Just one example from the last race for the presidency was Republican candidate Ben Carson who declared in September 2015, “I would not advocate that we put a Muslim in charge of this nation. I absolutely would not agree with that.”

It should be rather astonishing that statements like these can be made in a country that prides itself on the principled equality for all its citizens. Yet, what is actually astonishing is that a statement like this can pass, without negative ramifications for the candidate. In fact, such statements often lead to higher approval ratings. Once again, too many Americans fail to realize that what is happening here is not only an attack on Muslims, but also an undermining of America’s constitution. 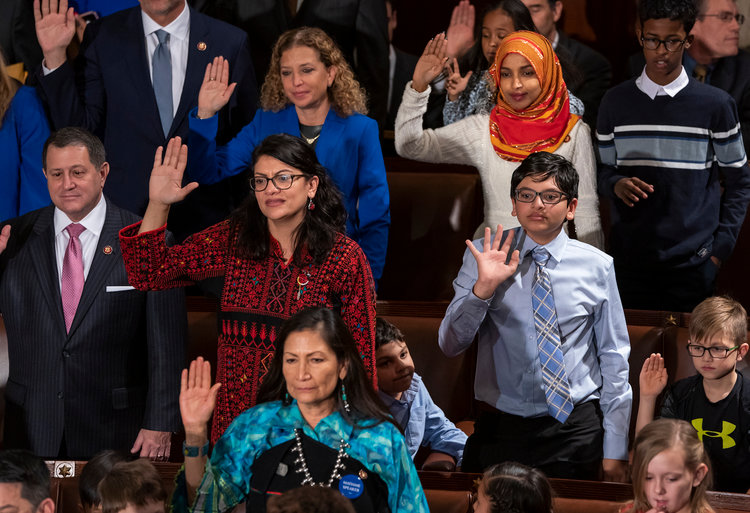 The fact is that today large swaths of the Republican Party and therewith also the religious right have betrayed the American Republic. The Republic rests on the shoulders of others. Muslims like Rashida Tlaib and Ilhan Omar are among those.

Both enter the House of Representatives as very accomplished women already. llhan Omar, for example came to the United Sates as a refugee in the mid-1990s.

In 2016, she became the first Somali-American, Muslim legislator in the United States as she became a member of the Minnesota House of Representatives. And already one year later Omar was featured in a Time Magazine edition spotlighting “women who are changing the world.”

Many of the policies these two Muslim women are advocating for are those that other advanced countries have pursued to varying degrees, and which has led them to achieve better living standards, healthier societies, and higher educational outcomes than the United States.

Among these policy priorities are healthcare for all, debt-free college, securing a $15 minimum wage, and ending corporate welfare. For many political scientists there is no doubt that America is in need of exactly such policies.

It will be such initiatives that will help move the country toward its promises for ever more citizens and truly allow for the constitutionally assured pursuit of happiness. Indeed, Muslims are not only needed guardians of the American Republic, but they are also the co-authors for an ever bettering America.