NEW YORK – New York Comic Con is one of the world’s largest cultural convenings with attendance reaching up to 180,000 over the convention’s 3-days. The 2018 convention—held October 4th to 7th—brought over $100 million dollars in revenue into the New York City economy.

This year, Muslims joined their fellow creatives to share their talents and assert their unique voices.

For the first time in the convention’s history, there was an all-Muslim panel discussing anime, comics, fandom, and Muslim culture. 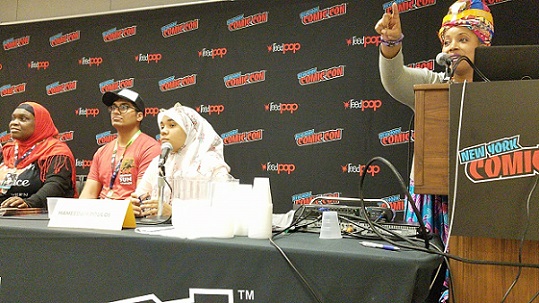 Comics is a huge industry of creativity with a consistent pool of fans. Muslim comic book artist Omar Mirza talked about his motivations for creating his comic book series Zindan: The Last Ansaars.

“The real catalyst for creating a project like this is probably this post-9/11 world. Pre-9/11, I don’t really think we would be as motivated to try to share our stories.

There’s so much misrepresentation about Islam and Muslims in the media. I think a very good vehicle to address or combat that is through fandom pop culture and try to normalize and maybe even humanize the Islamic experience so that people don’t see us as foreign and scary.”

Adil Imtiaz explained his motivation for launching the Baraaq comic book series. “If you look at movies like Batman vs. Superman or the first Ironman, there are Muslim scenes that reinforce stereotypes about Muslim culture.

We were experimenting to see what kind of response we would get. Alhamdulillah, the response was really great across the world. Then we decided to shift to animation. We are working on a web series.”

Not all Muslim artists seek to create explicitly Islamic content, but their voices are still part of the culture.

“With fandom, it doesn’t always have to be secular,” explained Mitchell, “and so you do have people who are using comics to talk about things from a more religious perspective, but then there is also space for people to [not].” 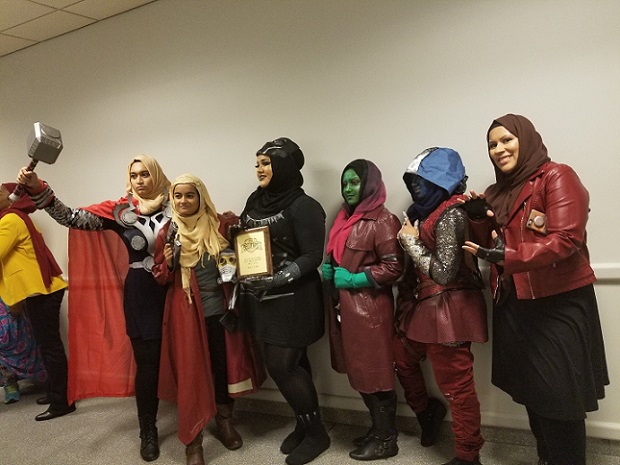 “I want to write more about people who are creative and Muslim,” said journalist, Jasmine Bager, “but sometimes editors don’t give me that space, so I have to fight with them. [People] need to support their [artists’] work so more people like me can write about it.”

“You’re all out here for us, and we thank you,” said comic expert, Yasmine Yasmine.  “For those of you who are not Muslim, we appreciate the support.”

Yasmine made sure there was a round of applause for the Hijabi Heroes, a group of covered Muslim women cosplayers. The group won the 3rd place in Marvel‘s Becoming Cosplay Contest. 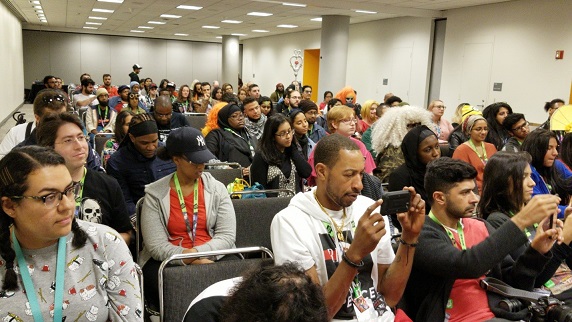 New York Comic Con is one of many that occur across the globe. Mitchell mentioned the 2018 Bahrain Comic-Con and others.

“The UAE had a comic con, and Malaysia had their first comic con in July. There has been a consistent comic con in Indonesia. Then you have the comic con in Nigeria and Egypt. There is one in Mali. Fandom is global and there isn’t one way to do it.”

Bager mentioned that Saudi Arabia hosted its second comic con this year. “We [her generation] are the ones who are creating the comic cons and other things in the country.

“We are creating our own versions of comics and animation.” 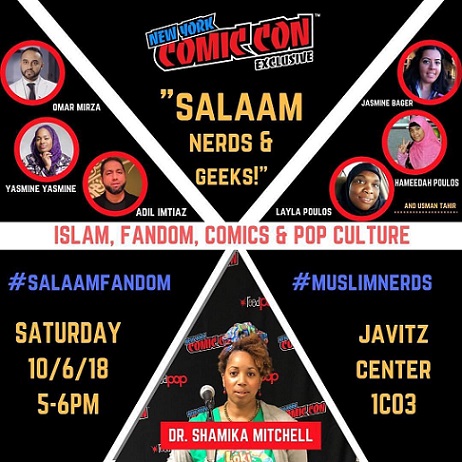