SURREY, BC – The Islamic Society of Ridge Meadows, British Colombia, Canada, has condemned recent leaflets that misrepresent Muslim reaction to dogs, accusing those behind it of stirring anti-Muslim resentment.

Shakeel Gaya, founder and president of the society, said the signs misrepresent the Muslim reaction to dogs when they say “dogs are considered filthy in Islam,” Surrey Now-Leader reported on

The issue came to light when leaflets carrying the logo of the City of Pitt Meadows were found at Hoffman Park.

The leaflets asking dog owners to keep their pets away from Muslims.

“Please be courteous to your Muslim neighbors. Many Muslims live in this area and dogs are considered filthy in Islam. Please keep your dogs on a leash and away from the Muslims who live in this community,” the signs say.

The issue stirred reaction on social media, with many seeing them as intended to foster resentment against Muslims.

“That may be a possibility,” warned Gaya.

“I can assure you this is not from the Islamic Society.” 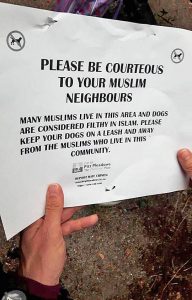 He added that observant Muslims are allowed to keep dogs, and they are used for hunting and as guard dogs.

“There are Catholics and people of other faiths who don’t like dogs,” he added.

He takes the signs as a misrepresentation of Islam’s view of canines.

“The motive would be suspect, to say the least.”

Ibrahim Hooper of the US-based Council on American-Islam Relations said although the group’s website is listed on the page, it had nothing to do with the signs.

Though dogs are regarded as impure, Muslims are allowed to train dogs to catch games, and to eat the game they catch as Imam Malik is usually cited to counter the notion of total impurity of dogs.