SANTA BARBARA, California – Members of Santa Barbara Muslim community hosted a “Giving Thanks” ceremony on Sunday afternoon, April 30, to express appreciation for community members who supported the construction of their mosque through its long journey.

“If I wanted to thank everybody, it would take more than the 17 years it took to get here,” Jamal Hamdani, the chairman of the Islamic Society of Santa Barbara, told Noozhawk.com.

“We are truly grateful. I want to thank the people in our community because there is a strong bond of faith, decency and goodness that has bonded us.”

Hamdani was speaking during a “Giving Thanks” ceremony held on Sunday.

The successful event was attended by around 150 people who attended the gathering, which included a tour of the building site.

The Islamic Society of Santa Barbara’s two-story, 6,500-square-foot mosque and community center is expected to open in the summer of 2018 on the half-acre lot purchased 16 years ago. 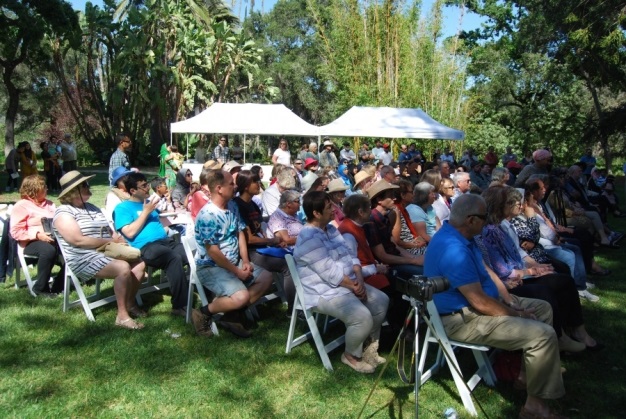 The independent Islamic Society is home to dozens of local families, who currently hold worship services, lectures and events at rented locations around Goleta — as they have since the organization was founded in 1985.

The property adjacent to Rancho La Patera & Stow House will serve as the new, permanent place of worship.

The center will be used for prayers, classes, and community and interfaith activities. The first floor will include an auditorium, library and meeting room, classrooms and an Imam studio. The second floor contains prayer and dining halls.

When completed, the $4 million project will be the first Islamic center between San Luis Obispo and Ventura.

“We made a strategic plan to build a place that would be a shining example of humanity, where we could practice the essence and values of Islam in an environment of tolerance, understanding and compassion,” Hamdani said.

Anticipating the inauguration of the mosque in 2018, Imam Yama Niazi, religious director at the Islamic Society of Santa Barbara, said the mosque would help in building relationships.

“We could have been a small number of Muslims trying to build a mosque — but, instead, we built a bigger human family,” he said.

“This is the purpose of our Islamic teaching. In this process, we got to know you.”

Growing the relationships would not stop after the mosque is finished with construction.

“In our country, we need more unification more than ever,” Niazi said. “There’s a lot of hatred, bigotry and anti-Muslim racism.

“As we continue, as a community, to build our relationships, this doesn’t end with building a mosque. This is just the beginning.”