Assuming her role in the campus, Hassan hosts Friday prayer for Muslim students and faculty.

Moreover, she brings in a therapist and imam at the campus wellness center to undercut the idea that seeking treatment for depression is un-Islamic.

She also takes Religion 100 students to mosques in the college’s Cedar-Riverside neighborhood.

Her role in campus was urged to cope with growing number of Muslim enrollment in Minnesota which has sometimes doubled or tripled in recent years.

Along with offering help to Muslim students, Muslim advisers reach out to broader campus communities to challenge the heated political discourse about Islam.

“With the growing number of Muslim students, it was really key to have a Muslim student adviser,” Augsburg’s pastor Sonja Hagander said.

“We can’t help but do what we’re doing.”

Augsburg College is not an exception.

Macalester College in St. Paul, which shares Vajid with Gustavus and Carleton, is looking to hire a part-time chaplain for Muslim life.

“Our state and our nation are diversifying in many ways,” said Paul Cerkvenik of the Minnesota Private College Council, “and our campuses have to adapt.” 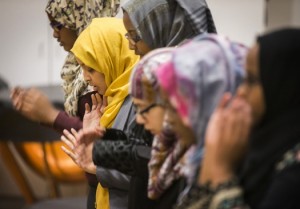 A study by Pew Research Center has found that Muslims attending college are at markedly higher rates than the general population, making up about 1 percent of graduates nationally.

To cope with the growing number of Muslim enrollment, more than 50 mostly private colleges and universities have Muslim chaplains or advisers, including top Ivy League schools such as Yale and Princeton.

“Over time, university chaplaincy has just blossomed,” said Feryal Salem, co-director of the Islamic chaplaincy program at Hartford Seminary, the only such accredited program.

Colleges are responding both to the enrollment growth and “the higher profile of Muslims in the American consciousness,” says Sohaib Sultan of the Association of Campus Muslim Chaplains.

“Our students need to know how to exist in a religiously plural world, and that’s one of the gifts Muslim chaplains bring,” said the Rev. Kate Smanik of the National Association of College and University Chaplains.

For example, Hassan helped students unfurl prayer rugs on the hardwood floor of a campus choir room in Augsburg, reserving the room for Friday prayer when the chapel was unavailable.

Young people must challenge the notion that “Muslims are hateful and violent and can’t function in a liberal, democratic society,” freshman Mohamud Mohamed said.

“Fardosa is our guide,” he said afterward. “She is our connection to the outside world.”

She also hosted a “healing circle” after Paris attacks to help students process the event and its aftermath, including presidential candidate Donald Trump’s call to ban Muslims from entering the United States temporarily.

“A lot of us worried this will be another 9/11 for us,” said sophomore Mariam Fawzy.

At Hamline, Muslim Student Association President Nadia Almosawi said Mood encouraged her to hang in there when she felt overwhelmed juggling classes and an internship.

He’s a “student adviser, a personal therapist and a life coach” for Muslim and non-Muslim students, she said.