LONDON – In a fresh breakaway from her old life, Hollywood actress Lindsay Lohan appeared on a Thailand beach while donning burkini, covering her from head to toe.

The two-piece swimsuit, usually donned by Muslim women, fully covered the actress as she got to grips with a large board on the beach before venturing out into the water, The Daily Mail reported on April 5.

Lohan’s hair was also covered with a black hood, part of the long tunic.

According to her Instagram, the actress has been vacationing in Thailand for two weeks, and before that was in Dubai visiting family. 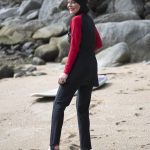 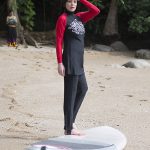 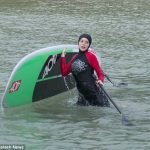 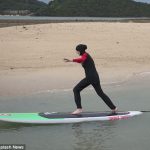 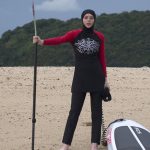 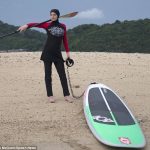 She recently revealed she has finally found a sense of ‘solace’ in her life, after hitting the milestone age of 30 and embracing her spiritual side.

“Studying the Qur’an is something I found solace in, a religion where I found a lot of peace,” she explained in a recent interview on TV.

“I have reached inside and I found what I want my intentions to be in the world… focusing on taking control of what I want out of life.

“You can’t just convert to a religion overnight – it’s a culture and practice [and] I don’t want to comment on something I haven’t finished,” she added.

The 30-year-old actress has raised many eyebrows recently after appearing in Turkey in what many perceived as a Muslims’ hijab.

In January 2017, the actress deleted all the photos on her official Instagram page, leaving only a bio which read “Alaikum Salam,” which made many fans speculate that Lohan has become Muslim.

Many fans welcomed Lohan’s claimed conversion to Islam, which came a year after she was first pictured while holding a Qur’an.

Yet, in a recent interview on Kuwaiti TV, she denied rumors that she was reverting to Islam, referring to Islam as a ‘beautiful’ religion.