“ICNA Relief is organizing this hurricane relief effort, coordinating mosques as shelters, directing evacuees to them, and collecting and distributing supplies to the mosques.

“We are also equipping mosques to offer logistical support to evacuees, including registration forms, guidelines and safety advice, departure procedures, and exit forms,” he added.

In Georgia, thirteen mosques plan serve as shelters from Thursday, Sep. 13th, through the end of the storm. Several other Georgia mosques are serving as drop sites for supplies. 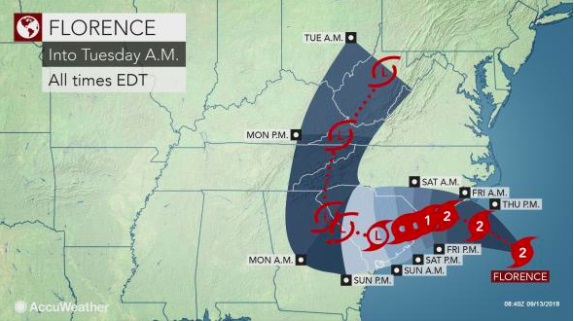 ICNA Relief has also deployed a disaster relief team, along with supplies, to the Carolinas.

“Our Disaster Relief Team is deploying for the Carolinas and will enter the area when it is safe to do so. Besides requesting financial support, we will be making a call for volunteers to help with mucking, gutting, and clean-up efforts, as well.”

After the storm, ICNA Relief and Association of Physicians of Pakistani Descent of North America (APPNA) also plan to deploy two mobile clinics and two ICNA Relief trucks filled with food items and toiletries to areas impacted by the disaster.

At least 13 were killed in storm-related incidents in North and South Carolina, including a mother and her child who died after a tree fell on their house in Wilmington, North Carolina.