The exhibit offers “an unparalleled view of some of the greatest [Islamic] calligraphy, illumination and binding,” museum director Julian Raby told The Guardian.

“Above all, we convey the sense of how artists from north Africa to Afghanistan found different ways to honor the same sacred text of Islam.”

“The Art of the Quran: Treasures from the Museum of Turkish and Islamic Arts” opened last October 22 at the Smithsonian’s Sackler gallery in Washington, DC.

The exhibition is organized by Turkey’s Culture and Tourism Ministry and the Smithsonian Museum.

Running to February 20, 2017, it covers more than 60 of the most important Qu’rans from the Arab world, Turkey, Iran and Afghanistan.

The objects are primarily drawn from the superb holdings of the Museum of Turkish and Islamic Arts (TIEM) in Istanbul.

The manuscripts range in date from the late 7th century (less than 100 years after the time of the Prophet Muhammad) to the early 17th century. 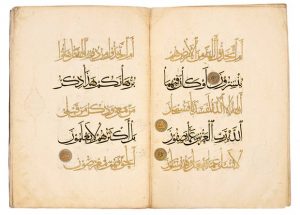 The Qur’an commissioned by Mongol ruler Uljaytu in Baghdad in the early 1300s and brought back to Istanbul by Suleiman the Magnificent. Photograph: Neil Greentree

“Scribes and copyists were … faced with the challenge of lending visual form to the meaning and content of the Word of God,” the official website explains.

“The result was the birth and subsequent development of Arabic calligraphy—beautiful writing.”

The Art of the Qur’an aims to introduce visitors to the Islamic holy book as both foundational sacred text – the divine message for Muslims, received by the Prophet Muhammad (peace be upon him) between 610 and 632 – and work of art.

Early sections present key aspects of the Qur’an, such as its references to previous prophets (including Abraham and Moses) and continuity with earlier monotheistic scriptures, and themes including revelation, Judgment Day and the mercy of God.

The latter half focuses on what co-curator Simon Rettig calls the “artistic traditions that originated from transcribing the Qur’an” over the centuries.

“It’s this idea of transformation [from a purely oral text] into a book, and adaptation.”

The show includes some of the oldest extant Qur’anic manuscripts, created within a century of the death of Prophet Muhammad (peace be upon him) in 632, which survived in part because the revered texts could never be thrown away.

Two parchment folios dated to before 725 during the Umayyad period in the Near East, for example, are marked in plain brown ink in the vertically oriented Hijazi script, with simple designs – such as a palm tree or geometric pattern – separating different chapters, or suras.