MAKKAH – About two million white-clad Muslim pilgrims from around the globe have begun moving on Sunday, August 19, to Mina on the first leg of their journey of a lifetime, preparing for the climax of Hajj when they ascend Mount `Arafat.

“This is the first time I have seen the Grand Mosque and the Kaaba. It is the best feeling of my life to be able to perform the Hajj,” 50-year-old Hisham Mostafa, an accountant from Aleppo who fled the war in Syria five years ago and now lives in Turkey, told Arab News.

From early hours on Sunday, nearly two millions of pilgrims have embarked on their slow and steady trek to Mina in the first leg of their five-day journey.

Spirituality and peace were in the air in the sprawling tent city which is surrounded by (Mountain of Light) and other hills, as more pilgrims poured in with every hour, each group reverberating with chants of “Labbaik Allahumma Labbaik” (O God, here I am answering your call).

Nayef Ahmed, 37, from Yemen, sold a plot of land to be able to afford to travel to Saudi Arabia for Hajj. “Because of the war, the cost was very high. But being here I feel comfort and peace and I pray to God for the war to end,” he said.

Najwa, 59, from Tunisia, said: “I came for Umrah in 2007 and today after 10 years of registering and waiting, I am here. I cannot describe the feeling. I cry every day.”

Many try to catch some sleep — after a tiring journey from Makkah that on average takes five hours – as they ready for the climax of their ultimate spiritual experience.

On Monday morning, the pilgrims will descend the Mount `Arafat where Prophet Muhammad (peace and blessings be upon him) delivered his last sermon more than 14 centuries ago.

They will take part in the symbolic stoning of the devil at Jamrat Al-Aqaba and sacrifice animals to mark the four-day `Eid Al-Adha, which starts Tuesday. 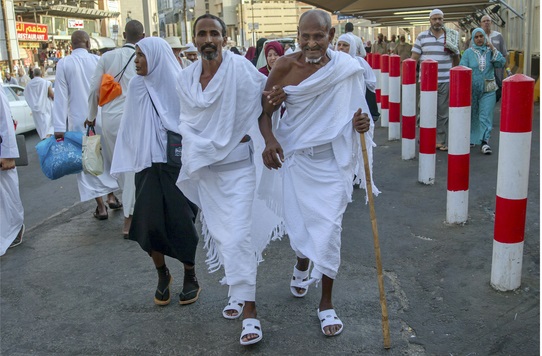 Saudi authorities have deployed personnel and facilities to secure an easy transfer of pilgrims during hajj rituals, taking all procedures to protect them from possible threats.

“We will prevent any actions that are not part of the Hajj ritual and any act that may impact the safety of pilgrims or their ability to perform the rite,” interior ministry spokesman General Mansur al-Turki was quoted by Arab News as saying.

To ensure their safety, pilgrims will wear electronic identification bracelets, connected to GPS.

“There is a comprehensive electronic agenda for every pilgrim and we have provided many apps that offer guidance,” said the Minister of Hajj and Umrah, Mohammed Salih Bentin.

“We have a fleet of more than 18,000 buses, all of them linked to a control system that tracks their path.”