MAKKAH – Riding his bike for thousands of miles, a Russian Muslim has finally reached the holy city of Makkah to fulfill his life-time dream of performing hajj.

All through the past three months, he pedaled his way to reach Saudi Arabia for the annual pilgrimage.

Abdulla is not the first pilgrim to cycle his way to Makkah for hajj.

Last month, a Chinese national also made headlines as he cycled around 8,150km and reached Saudi Arabia for the annual hajj pilgrimage. 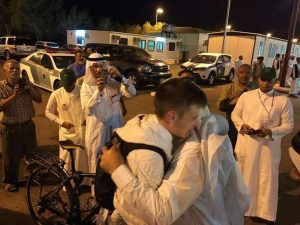 Hajj starts on the eighth day of the lunar month of Dhul Hijjah, which falls this year on September 10.

The Russian and Chinese pilgrims are not the first Muslims to take the challenge to arrive Makkah with a different method than traditional transportations.

During his journey, the Muslim man walked for nearly 3,600 miles (5,900 km) from his Bosnian village to the holy city of Makkah.

In May 2014, a group of Malaysians rode their bicycles from Kuala Lumpur to Madinah.