BELGRADE – A Serbian couple and their children attended a Nova Pazar mosque, Belgrade, Serbia, pronouncing the Shahada, declaration of faith, before the local imam, and officially converted to Islam.

The couple, Bojan and Natasa, with their sons, Filip and Ognjen, took shahada on Saturday, March 18, in front of the imam Asmir ef.Crnovrsanin, Telegraf reported.

After embracing Islam, the married couple took Muslim names Ismail and Edina, while the children got the names Esad and Hamza.

The head imam of congregation of Novi Pazar welcomed the family to Islam. Later on, the couple had a small Islamic wedding ceremony in the mosque.

Muslims make 3.1 per cent of Serbia’s population estimated at around 7 million, according to CIA Factbook. 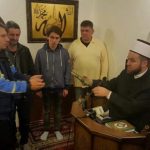