“To give some context, that equates to approximately £38 a second.” Nick Donaldson, outreach manager at the Charity Commission, said in a blog published on the regulator’s website, Buzz Feed reported on Tuesday, July 19.

“The sheer scale of the work is immediately apparent.”

A Twitter user called Anna, an Oxford law graduate and trainee solicitor, tweeted that UK Muslims gave £100 million to charity during the month of Ramadan this year – the equivalent of £38 every second.

The tweet came a day after Sun columnist Kelvin MacKenzie wrote that it was not appropriate for a “lady in a hijab” to cover the Nice attacks, one woman from Wales decided to try add some balance to on social media.

Throughout Ramadan, Muslim charity organizations hurry up to launch more campaigns in order to support the needy all over the world and grasp the blessings of this holy month, the month of giving.

Their activities vary from food packing and distribution, financial donations, collective Iftars, to shelters and many others.

Some individual donations were as much as £30,000, the commission said.

“In speaking to the charities, I was reminded that all of this charitable work, this change, is reliant on generosity; that none of this would happen were it not for people choosing to spend money and time on something other than themselves,” Donaldson said.

“My contacts spoke of numerous people giving single donations of up to £30,000.” 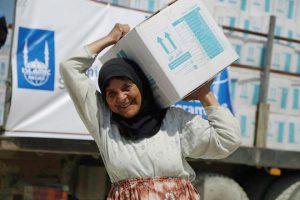 Donaldson added that other efforts by British Muslims included delivering 22,000 cakes “on long, hot Sundays during Ramadan by volunteers who were themselves not eating or drinking”.

He also praised those who gave generously even though they wouldn’t “get to see the projects they are supporting”, as many are based overseas.

Over 200,000 individuals spanning across 28 countries around the world were reached by Muslim Aid during Ramadan through initiatives such as the Dig a Well program, which helps provide communities in developing countries with clean water.

On the other hand, Islamic Relief said it had distributed food packs to over 1.2 million people this Ramadan, in 31 countries.

“Last year Islamic Relief UK raised £8.7 million for the world’s poor and needy and this year we have raised over £9 million,” the commission said.

Britain is home to a sizable Muslim minority of nearly 2.8 million according to 2011 census.