BERLIN – Over 200,000 people took to the streets of Berlin Saturday, October 13, to protest the rise of far-right populism in Germany and Europe, demanding more solidarity with marginalized groups.

“There are people here who want to show that they don’t support what is going on in Germany, including from established politicians, all this hate, this whole debate about immigration,” Rola Saleh, a social worker who helps young refugees in the eastern city of Chemnitz, where far-right violence made international headlines in late August, told Deutsche Welle.

Saleh was speaking as more than 240,000 people demonstrated against racism on Saturday, calling for solidarity against the rise of far-right populism across Germany.

A 5-kilometer (3-mile) stretch of the capital city’s center, from Alexanderplatz through the Brandenburg Gate to the Victory Column, had to be closed down to accommodate the huge parade, which was united under the hashtag #unteilbar (“indivisible”).

Various rights groups, unions, organizations, NGO’s, and political parties have all united behind the slogan: “Solidarity not marginalization.”

Some 10,000 organizations and individuals signed the declaration last week, which began with a note of alarm at the current trend in Germany’s political debate: “A dramatic political shift is taking place: Racism and discrimination are becoming socially acceptable,” it read.

“What yesterday was considered unthinkable and unutterable has today become a reality. Humanity and human rights, religious freedom and the rule of law are being openly attacked. This is an attack on all of us.” 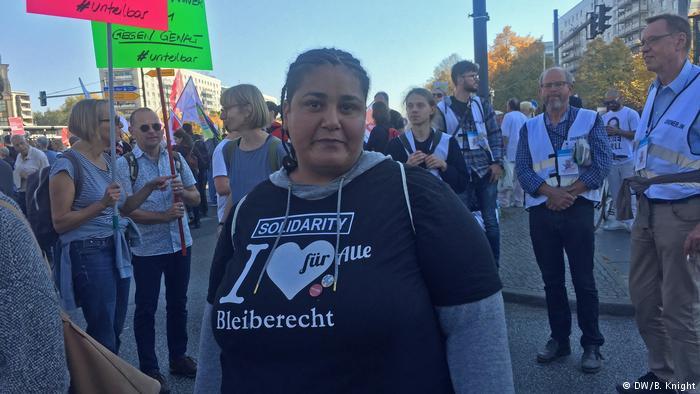 Saleh, who was in Berlin to give a speech for her group Jugendliche ohne Grenzen (“Youth without Borders”), told DW that refugees and people helping them were being “criminalized” in Germany.

“At the moment, a new police law is being planned in Saxony that would allow our advice center, where we give refugees legal advice, to be spied on,” she said. “These are things that are happening now: deportation custody, ‘anchor centers’, the marginalization of refugees.”

“We don’t have answers to a lot of the questions that the refugees ask us,” she said.

“After the conflicts in Chemnitz, a lot of the refugees are afraid and uncertain about the situation. They feel like they’ve been abandoned; a lot of them are trying to leave Saxony, or they’re afraid they’ll be provoked into criminal acts by a situation. If you feel like you live in a state where the police are not ready or able to help you, you start thinking about finding ways to protect yourself.”