We are living in a ‘multi-polar’ reality. This new buzz phrase describes how aspects of our lives, including Muslim celebrations, are less likely to be dominated by singular cultural expectations, as they once were.

In the West, our faith-based holidays are moving beyond family and food, opening up to a plurality of expression and the need to recognize the broadness of the cultures in which we live. We are embracing the diversity of our own families.

`Eid ‘fun’ can now mean that anything goes, so long as the kids are happy, the elders are fed their favorite foods and there’s no; alcohol, pork or nudity.

My `Eid weekend, was a dizzying mocktail of venues, cultures, and activities.

My eldest daughter and I attended 7.45 am `Eid prayer at Palmers Green Mosque, North London. By the grace of Allah, we walked straight into the last two spots in the rows as the salat began. The khutbah was in English, the recitation soothing.

For the first time in seven years as Muslims, we really pushed the boat out with our outfits and makeup. I was in a bright pink, flowing dress with gold embroidery. My daughter in deep green with glittery hijab and heels. We felt very overdressed, our dear sisters had opted for the Sunnah of smart, natural, beauty.

Still, if I’m honest I did enjoy the raised eyebrows we received as we sashayed amongst the demure, Muswell Hill set. People on their way to work had clearly not received the memo that Arabian princesses would be walking down their high street at breakfast time looking for somewhere to eat and a bathroom to change into their more sensible clothes.

By midday, we were sitting at a wooden kitchen table to the best brunch of the year at the South London home of our dear friends Brother Rahim and sister Amy. Everything about the gathering is ‘fusion’.

Youngsters from around the globe or just around the corner, choose to hang out amongst the bustling, laughter, in an atmosphere at once traditional yet non-judgmental. Men and women gather – by choice – in different rooms to eat. But no one tuts at youngsters chatting together. As for the food, it just doesn’t get better than Asian style scrambled eggs, English halal sausages, chili beans, American hash browns and French bread. 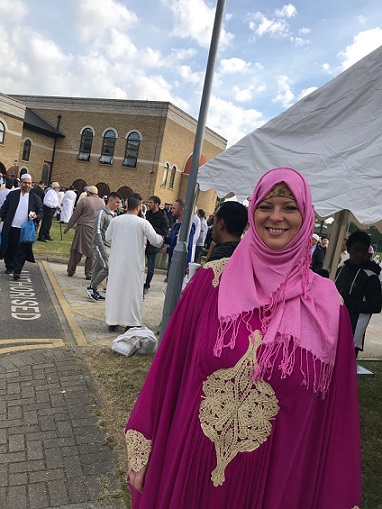 The Ummah is scattered, dispersed. Our young study abroad or in other cities, where they then lay down roots.

As adults, we increasingly seek our incomes with thought to financial security rather than family ties. Those of us who can may have accepted Allah’s invitation to see His world in order to reflect upon the good in it.

`Eid brings these separations and opportunities into sharp relief. Intentionally or through personal trials, some of us may be split up, lonely.

Homes like Amy’s and Rahim’s offer a haven of family life for Muslim Nomads of the twenty-first century.

By late afternoon it was time for the inter-generational, game of rounders. We had teams of more than fifteen a side, aged from four to mid-sixties.

’Third base!’ I screamed towards a teenage lad, who seemed to have forgotten that age equals experience and didn’t throw to me.

‘Third!!!’ I yelled as players on second base dashed towards me. No one threw to me.

Then I felt it. My old competitiveness rising up, a fury building in my chest. The desire, to win, to tell the others (who are playing for fun – no such thing!) that they don’t know the rules.

But a strange thing happened.

For the first time EVER, I walked away at the start of the game. I threw in the towel. My heart told me that the point of fasting was to learn self-control. If on the day of `Eid, Ramadan is thrown away, what was the point? I slumped into a camping chair, with a private sigh of moral victory. 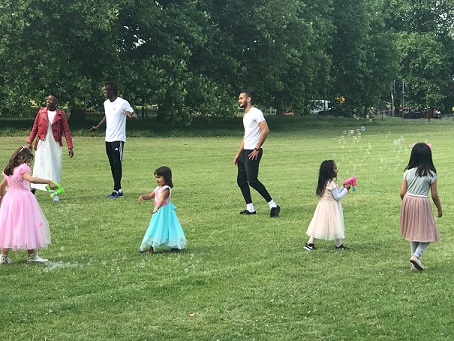 My daughter and I spent the night in a different household, with special friends Anisa and her daughters and baby son. Anisa is a fellow, convert and her family even more spectacularly Nomadic than my own. In the six years, we have known one another, each of us have moved five times. We have spent more than six months abroad too.

Homemade high tea of scones and cream, we ate Bedouin style on her wooden floor. The dining table was next to us, ignored. Handcrafted fish and chips late were munched, also on floor level, late at night. Then, Mums, teen girls, and babies watched a positive-message movie, curled up on bean bags. Bliss!

Saturday was time to take the kids to one of the London `Eid Fairs. Toddler Aaliyah, barely visible beneath a bubble of candy floss saw something in the distance and screamed.

Right in front of us, amongst the bumper cars, burger stands, and Muslim families, was a building frontage as high as a three-story house. Giant skulls were on sticks at its front. Spray painted images of faces distorted in terror and in agony wailed towards us.

One of the teen girls jumped about: ‘I am so going on that!’  But the older girls grew angry, rounding on her and shouting:

‘You’re not going near it – are you mad?’ The Mum’s fell into a noisy discussion about the suitability of anything like it on a religious weekend. 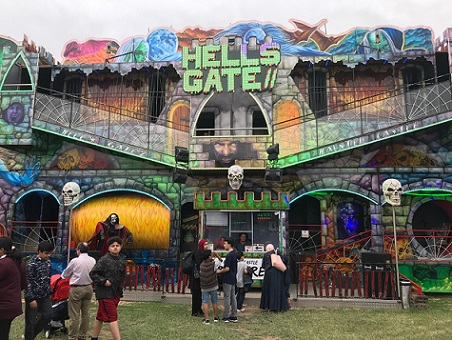 Our day-out ended in a half hour argument because of an ‘amusement’ called ‘Hell’s Gate’ at an `Eid fair.

“Allah’s Messenger (sal Allahu alaihi wa sallam) said: ‘You will indeed follow the ways of those before you, hand span by hand span, and an arm’s length after another. Even if they enter into a lizard’s hole, you will follow them.’

But I do wonder if inviting Muslims to enter Jahannum the day after Ramadan isn’t a step too far?