CAIRO – A football club run by a local Islamic foundation in Blackburn has extended new bridges in the community, welcoming children of all faiths and encouraging young Muslim children to be creative and express themselves on the ball.

“I am so pleased he is mixing with boys from everywhere and there are no barriers and divisions,” Samina Ali, a mother who was watching her nine-year-old son Muhammad while playing, told The Guardian on Wednesday, June 1.

Standing on the touchline, she added: “I thought you wouldn’t get many mums watching but actually I haven’t found that; there are quite a few. I’m ever present, I want to give him that support.”

Young Muhammad was playing in AHF FC which was named the Football Association’s charter standard club of the year in 2015.

The club, run by Abu Hanifah Foundation, emphasizes a progressive interpretation of Islam and an aim of nurturing rounded young people who will make a positive contribution to wider British society.

“But why should boys have all the fun?”

Along with joy, the team was offering young Muslim kids a better chance to meet others and break barriers.

Muhamed Asif, aged 12, a keen player for AHF, is one of 13 members on its youth council, which organizes trips, a fun day, and acts as a means of giving the children responsibility.

For him, playing football has been all positive, recalling how it helped him to be best friends with the lad who bullied him at school.

“I think it is because we started to play together, so we were on the same level,” he said.

“I wasn’t that good in the playground, people didn’t want me on their team, but with the coaching and training I have improved a lot, and now they do.”

When the games finish, Yasir Sufi, club’s secretary, reminds all the opposition players: “Don’t forget to get yourself a cupcake.” 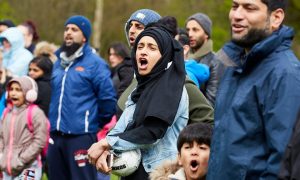 Coaching the team, Zuber Patel said he wants to be a role model for young Muslim people, and also more widely to enhance general understanding of Islam as a religion for peace and good values.

The cupcakes and tea and coffee are part of this philosophy, providing hospitality to visitors.

“There are three key values to the club,” Patel explained.

“The first is how we play, for the children to all develop as individuals, to be creative and brave on the ball. The second is coaching, based on skills, that is in the DNA throughout all the teams. The third is most important and really why we exist: to show who we are, our true values and character, in a public arena.”

This fostering of a better environment for parents, as well as children, has been developed countywide by the Lancashire FA with an Adults in Football workshop, which the FA is planning to roll out nationally.

“Blackburn is segregated, everybody knows that. But it is about breaking that down, building good relationships and changing perceptions.

“Things can change, and we can be part of that. That, above all, is what we are here for.”