ATHENS – The Muslim migrants who saved lives during Athens wildfire last July have been granted Greek citizenship in a ceremony attended by the Greek President, BBC reported.

“You are now European citizens too, and so you can teach all our partners who don’t realize the values of Europe, to do what they ought to do,” the Greek President, Prokopis Pavlopoulos, said on Wednesday’s ceremony.

Fleeing Athens wildfire, which killed at least 90 people, hundreds of people were forced into the sea as the flames approached, but others were trapped near the coast.

The migrants, Ibrahim Mahmoud Mousa and Emad Al Haimi from Egypt and Jake Gani from Albania, who all work as fishermen, rushed to save the lives of people.

Interior Minister Alexis Charitsis said the three, along with Greek colleagues, had rescued “dozens of our compatriots.” 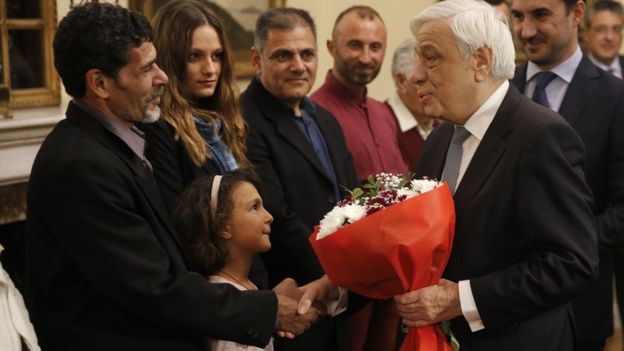 In emergencies, “there is no religion, there is no black and white – when someone sees something like that he must go there and even give his life to help rescue people,” Mousa told the Athens News Agency.

“And I would like to send a message to all foreigners, that they should all respect the places where they live.”

Al Haimi added, “thank God we managed to save some people and I would do this again a thousand times.”

“As long as I live, and can, I will be trying to do good for Greece. I will do that without second thoughts.”

Last September, France awarded citizenship to a Malian migrant, Mamoudou Gassama, nicknamed “Spiderman”, after he scaled an apartment block with his bare hands to rescue a four-year-old boy dangling from a balcony.

The number has increased significantly after the flock of huge refugee crowds over the past two years into Europe.

Currently, Greece is home to more than 300,000 Muslims, mostly comprised out of the officially recognized “Muslim minority” of Western Thrace Turks and Pomaks, along with ethnic Albanians.