ATHENS – When wildfires erupted on the Greek coastal village of Mati on July 23, Mahmoud Al-Sayed Mousa, an Egyptian Muslim fisherman, did not think twice before rushing in to save the lives of people whose only escape option was the sea.

“We heard that 150 people were trapped between the fire and the sea,” Mousa told Al Jazeera.

Immediately, 46-year-old Egyptian fisherman rushed out of his home and climbed onto his bicycle, arrived at the port in Nea Makri, where he and his boss Kostas set sail in their fishing vessel.

“We are going to save the people [fleeing] the fire,” Mousa says in the clip.

In the sea, debris scattered as thick black smog blocked their view of the flame-engulfed village in the distance.

“You couldn’t see in front of you, and you couldn’t breathe,” he recalls.

“It was the hardest moment,” he says, resting his work-scarred hands on his lap. Tears well in his tired eyes.

“If we entered the smoke, we could die. If we didn’t enter, the people wouldn’t be saved.”

They steered the boat into the dark, unsure of what to expect.

“We either bring them back with us or we die with them, God willing,” Masoud told Kostas.

Mousa knotted a rope and flung it into the sea, grabbing one after another. 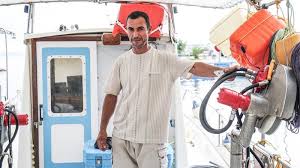 “We scooped them up like when we’re fishing,” Mousa remembers. “People were crying and shaking while they hugged us.”

By the time it was over, they had saved 23 Greeks and four dogs.

The wildfires scorched 6,879 hectares of forest and residential land.

Mousa is not the only Muslim who answered the call to help. Several other Egyptian fishermen answered the coastguard’s call for assistance, and Pakistani and Afghan migrant groups sent volunteers to Mati to help in the cleanup effort.

Naim Elghandour, the Egyptian-born president of the Muslim Association of Greece, described the efforts of Muslim refugees and migrants during the wildfires and after as “heroic”.

“In the past, Egyptian fishermen were victims of racist violence by the criminal party Golden Dawn,” he tells Al Jazeera, referring to the neo-fascist party with 16 seats in the Hellenic Parliament.

“But humanity doesn’t differentiate between nationalities, and there is no difference between Greeks and Egyptians.”

Although rattled by the tragedy, Mousa said: “I’m happy I was part of the reason those people were saved … It was our duty to help.”