LONDON – Mosques in the UK should hire British-born imams on a living wage who are better equipped than foreign religious leaders to understand the challenges faced by British Muslims, a report has recommended.

“The management committees of a number of the UK’s mosques need to better understand, and respond to, modern British life,” the Guardian cited the report on Monday, July 3.

“It is of great importance that British-born imams, who have a good understanding of British culture and who fluently speak English, are encouraged and appointed in preference to overseas alternatives.”

The report, Missing Muslims: Unlocking British Muslim Potential for the Benefit of All, is the outcome of an 18-month inquiry established by campaigning group Citizens UK and chaired by the former attorney general Dominic Grieve.

The group’s chief task was to examine how the participation of Muslims in public and community life might be improved.

Writing in the forward to the report, Grieve said that his commission sought to highlight the false and “potentially dangerous” assumptions that are made about the views of British Muslims.

“Polls demonstrate significant skepticism across British society about the integration, and even the shared allegiance, of their British Muslim fellow citizens,” said Grieve, who is a Conservative MP for Beaconsfield.

He said that Muslims face “considerable challenges” from within their own communities that prevent them from participating in public life.

“The Commission has also heard, forcefully expressed to it, the fear of many Muslims that, even in seeking to participate in public life or to work on a cross-community basis, they become subject to a much greater degree of adverse scrutiny, or to allegations about their motivation, than would be considered normal or acceptable for their non-Muslim counterparts,” Grieve wrote.

“This is a matter for which there is overwhelming evidence.” 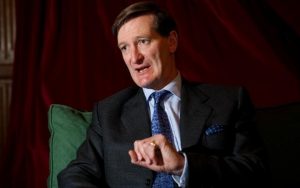 The report found that the “increasing absence” of Muslims from British civil society is a “growing problem” in the UK.

It included several recommendations such as a call for mosques to review their management structures and appointment of imams.

“The management committees of a number of the UK’s mosques need to better understand, and respond to, modern British life,” it says.

“It is of great importance that British-born imams, who have a good understanding of British culture and who fluently speak English, are encouraged and appointed in preference to overseas alternatives.”

The report also tackled the infamous Prevent strategy, which was criticized by British Muslims several times.

Acknowledging that an effective way of tackling extremism and radicalization was an overriding concern, the report said: “This would be better achieved with a program that is more greatly trusted, particularly by the UK’s Muslim communities.”

“There is a need for debate within Muslim communities about what are, and are not, acceptable views for the Muslim ‘mainstream’. However, attempts to define this through it being imposed from the outside are unlikely to be helpful and more likely to be counterproductive,” the report said.

“There is a strong sentiment that Muslims, as a monolith community, and Islam as a religion are unfairly targeted. This too creates a sense of alienation, which undermines a common aim of creating a united and strong society.”

The government should be “prepared to engage with views with which it disagrees and challenge these in discussion”.

The commission was co-chaired by Jenny Watson, who has previously chaired the Equal Opportunities Commission and the Electoral Commission.

Other commissioners included Sophie Gilliat-Ray, a professor of Religious Studies at Cardiff University, and the founding Director of the Islam-UK Centre.