PARIS – Emilie, a French Muslim revert, has a hard choice to make in the French presidential election. The concern is shared by almost two million French Muslim voters, who will have to choose between the centralist, ex-banker, Emmanuel Macron, and the far-right candidate, Marine Le Pen.

It is hardly a choice that fills her with joy, finding herself obliged to choose Macron as a tactical vote against Le Pen to keep the far-right away from the Élysée.

The situation is very much similar to that in 2002 when the Muslim community had to vote for Jaques Chirac to defeat Marine Le Pen’s father Jean-Marie Le Pen, giving Chirac a landslide 82% win. History seems to be repeating itself.

Even if Macron gets in power, she doesn’t believe life will change that much for French Muslims. Macron is not really interested in improving life for Muslims, life will go on the same. Muslims and minorities will still not have the same rights to education and work. Macron will not change the conditions for Muslims or minorities. They have to vote as French people rather than what they need as French Muslims, simply because there is no other option.

One thing is for sure and that is most French Muslims will not want to vote for an Islamophobe like Le Pen. She is not just against immigration, she is against Muslims, Jews and Sikh minorities already within France, making their future very uncertain.

If Le Pen does win, France will most likely face a police state and more discrimination against Muslims. It will also give people who voted for her, a free pass to target Muslims, especially French Muslim women wearing Hijab. It will be a similar situation to what is happening in the US under Trump, however, what is more scary is that there are more Muslims living in France, so a lot more people, especially women, will be threatened. 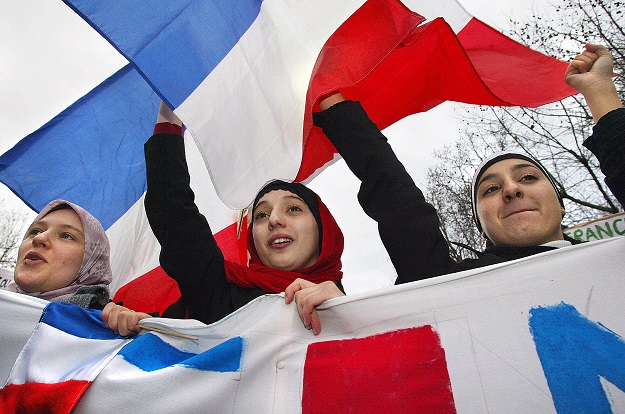 Though opposing Le Pen, many young French Muslims are uninterested in going to vote, seeing no difference between both candidates. This is what we have seen in the US as well as UK when it came to Brexit last year. If people would take their voting rights more seriously, then there would be a different system in place now.

None of the parties, left or right, have given the French Muslims a chance to be part of the society. French Muslims struggle to rent an apartment, find a job or get a good education because of their names or for hijab for women.

The situation is difference in cosmopolitan cities like Paris, where people don’t feel hate for being used to living in a mixed population.

The areas where Le Pen has the majority is the countryside and the South of France, where many older people live as well as Arabs side by side. These places are right beside the Mediterranean where the first wave of immigration came from. Of course, this has made the older people angry and afraid, somehow, of immigrants. We also saw a similar trend in the US and Brexit, where the majority of older generations voted for Trump and Brexit because of similar issues.

The media, as usual, are portraying Muslims as the enemy of the state. Therefore, even people who have nothing to do with Muslims believe the lies that the media tell.

The usual story of integration pops up because Muslims may not want to celebrate the same things as the French do, but what does that matter if they pay their taxes and do not break the law. Surely that means they are contributing to the French society as French citizens.

No matter who is in power, Muslim women are the targets and have always been. Look at the Burkini scandal last year when a woman was forced to remove her sleeved attire or leave the beach.

This happened under a left-wing Presidency and yet nothing happened to protect Muslim women. Hijabi women were even stopped going to Trocadero, which is a very famous place in Paris, for “security reasons”.

To conclude, French Muslims cannot let Marine Le Pen win in order for the situation do not get any worse.

Macron will not improve the situation, but French Muslims hope he will not make it worse for them like Le Pen has promised.