MASHHAD, Iran – On the plane from Istanbul, I have been chatting to an old friend, Rabbi Yisroel Dovid Weiss. The best networker I have ever met. Within minutes of noticing me in the plane, a row behind, the spokesman for Neturei Karta, an anti-Zionist Jewish group, has handed me a business card and multiple flyers on his movement’s aims.

We are heading to Mashhad, Iran’s second most populous city, as guest speakers at the annual New Horizon Conference. A rare opportunity for 50 ‘alternative’ minded journalists, former US diplomats, politicians and activists to present and debate on topics of geopolitical interest.

Our host and chair of the three day event, is one of Iran’s most admired filmmakers, Nader Talebzadeh, internationally known for the TV show ‘The Messiah’.

This is my first visit to Iran since 2010. The schisms wreaking havoc and agony across the Ummah today, which I do not ascribe to, have nonetheless made me cautious of being labelled ‘this’ or ‘that’ type of Muslim.

As soon as we touch down I feel happy to have returned. Iran, like Turkey and Pakistan has an air of confidence and political self-determination, missing in many other Muslim nations today. It also has a population of 80 million mostly Shiite Muslims, passionate about their faith.

It is day one of Ramadan. I am not fasting, encouraged by my hosts to take the concession of delaying the fast given by Allah The Most Merciful to the traveler. I am however, very keen to find a quiet, spiritual place to pray. 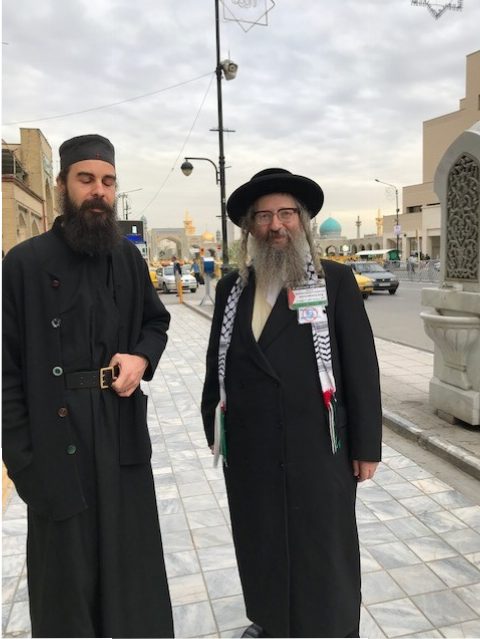 People of the Book

Rabbi Weiss, and an extremely quiet Father from the Russian Orthodox tradition, Yuri Koval-Temnikovskiy, are equally keen to visit the shrine. The Rabbi has been promised the chance to see ancient Jewish texts in the Shrine’s world-class library which ranks in the top four worldwide. To give some context as to what this means, the number one religious library in the world is in the Vatican, Rome.

The three of us walk the kilometer from our hotel to the golden-domed shrine complex. My companions draw stares from the start. They certainly stand out in this part of the world, which has been cut off from global tourism for almost three decades, by international sanctions.

We are quite a sight; the Muslim woman, Christian Father and Jewish Rabbi, rushing at Asr time through the streets of Iran’s third major populace towards one of its most holy cities.

At last we reach the white marble tiled gateway to the world’s largest mosque (by dimension).

The library has just closed. Rabbi Weiss is crestfallen.

“Everything is God’s will,” he sighs.

The three of us are guided down an escalator to the family prayer area. This is the nearest that female believers get to the site considered a holy place of pilgrimage, a green, neon, chandelier marks the spot beneath the Imam’s grave.

And then it happens. There is a whisper as we walk down the main hall between green carpeted prayer areas under an array of dazzling mirrors. A woman to our right, head to toe in a black chador, covers her mouth and says something into her palm. Like a vibration this reverberates through the Ramadan Muslim crowd walking until it becomes a large echo.

The Iranian pilgrims are stunned and begin to say over and over again:

Throughout Islamic history, the People of the Book have been always treated with compassion in Muslim societies.

The Jewish community, whose rights were denied and were tortured under the rule of the Catholic Kingdom of Spain, sought and found refuge in the lands of the Ottoman Empire. 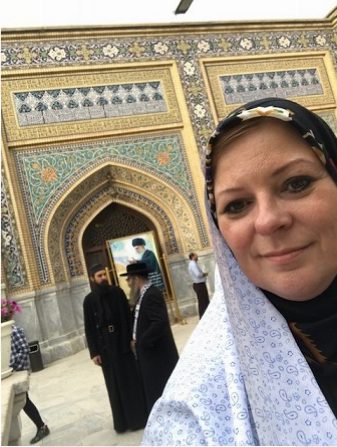 The Arabic words ‘Ahl Kitaab’ prick my eyes, I swallow hard as a realization hits me. On the first day of Ramadan, I am blessed to be with two devout members of our linked faith traditions mentioned directly by Allah ta’ala in the Holy Qur’an. We are all outside this particular faith, Shiism in one way or another. Yet here we are being made welcome in Islam’s most holy month into a shrine. Welcomed by people with every reason to distrust others, not of their own sect, culture nation.

I explain the meaning of the words to Rabbi Weiss and Father, that they are being honored, recognized, by the Pilgrims.

In this fractured world, unseen power bases are seeking to make what divides us far larger than our unifying love and care for one another.

Strolling through the Imam Reza Mosque in Mashhad with a Rabbi and a Christian Father, I am reminded our tribes and faiths may be different but that Allah always, talks of the believers as those who will be forgiven because of personal taqwa.

The ultimate goal of Ramadan.