LONDON – Workplace discrimination is a real issue affecting many individuals and organizations across the UK.

Leading the way in an effort to counter this unjust practice is one of the ‘big four,’ KPMG who employ over 180,000 in the financial services sector around the world.

On Tuesday, 13th of November, KPMG hosted a talk at their UK head office in Canary Wharf London with three speakers diligently sharing insight on the subject of workplace discrimination, each talking about their experiences and suggestions on how to tackle an area affecting not just Muslims, but other religious minorities and those identifying as LGBT.

“For every 1 occasion you see a neutral or positive term describing Muslims in the print press, there are 21 references to Muslims being extremists,” he told the audience.

“Now we know we have a problem in our community, but by God, for every 1 peaceful person, there aren’t 21 extremists out there. But that is what you might be led to believe based on some media outlets.” 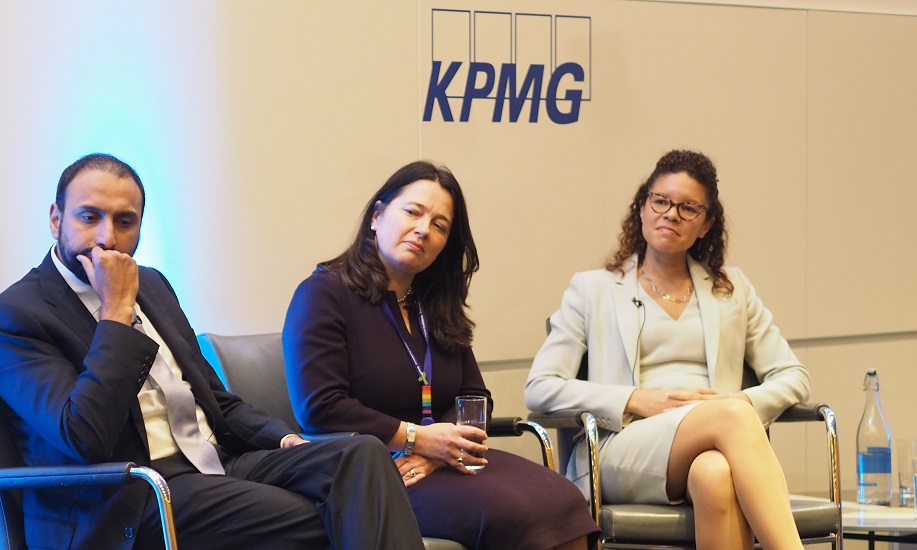 The Importance of Interfaith Teamwork

Anna Purchas, Head of People at KPMG, shared how extensive research internally has allowed the organization to have a view of the existing corporate culture, with a focus now moving on to a target culture.

“.. We start with T, E, A, and M, which spells TEAM, which sums up our main focus around teams and having an inclusive, collaborative, culture…

“Of course these are not just nice words that we get up on stage to talk about, it gets translated into actions. And one of the first actions that we are looking at is for all of our partners investing quite a significant investment this year into a collaborative leadership academy. Looking at how we can work together as well as we can to create an inclusive culture.”

The third speaker of the evening, Justine Lutterodt, Director of the Center for Synchronous Leadership, shared insight from the perspective of leadership.

Justine touched upon a hard truth, “What happens in society does affect people, we are not really in a bubble.”

In doing so she shared the realization that actions, be they positive or negative impact all of us, to the point where if our ability to live, and our ability to respond, is not represented by our ability to make decisions freely, then as individuals and society we do not reach or deliver our potential.

This hindrance, whether affecting Muslims and labeled as Islamaphobia, or whether affecting other minority groups, therefore, in the long-term, stagnates the ability as individuals and businesses to grow, and limits potentials. It also makes people less competitive and so less profitable.

And while the bottom-line may be the motivator sought by all businesses, beyond income there is an increasing focus on mental health, wellbeing and a holistic contribution towards society. 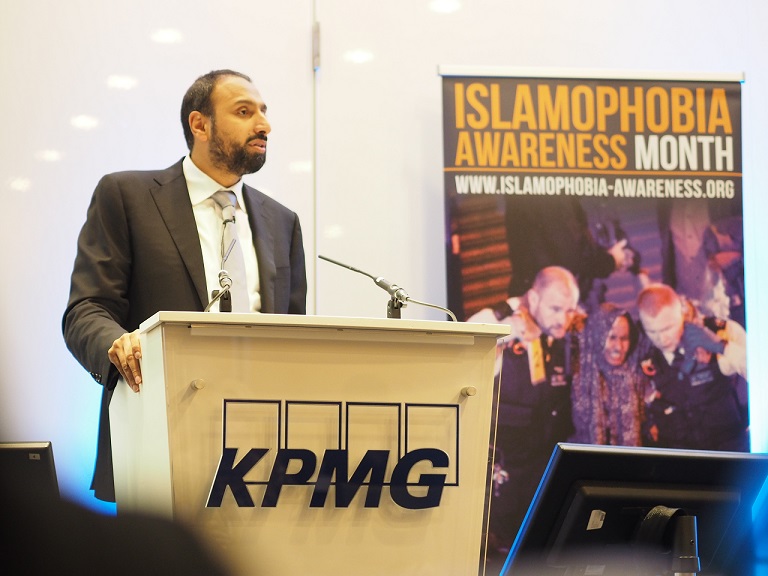 The Impact of Education

Sufyan shared some additional insight on the evening, some of which was quite unexpected.

“Research from the cabinet office carried out a report that shows that in 2008-2018 even though Muslims are just 5% of the population, one-quarter of the growth in the UK’s working population comes from the Muslim community.

“So the number of Muslims that already exist in Canary Wharf (one of London’s two main financial districts), and you add to that the number that will do over the next 5-10 years, it is phenomenal, compared to the 5% that the Muslim community is.”

Closing his speech, Sufyan observed a perfect summary for the evening, that “Islamaphobia Awareness Month is serving as a platform through which everyone is not just able to express themselves in as comfortable an identity as possible, but everyone at large is able to see what the reality of Islamophobia is, and how we can all work together to make it history.”

Indeed, it is only when people understand the causes of discrimination, address concerns raised by people leading to discrimination, and work together as communities across faiths, that the focus will shift away from subtle and casual discrimination, to confident and focused mutual growth.

In a world increasingly engaged in the age of near-instant information and exchange, this is an objective not just for individuals but for corporations and society on a whole.