LONDON – A new study examining the experience of British men who reverted to Islam found that male reverts usually complain of isolation feelings, resulting from stereotypes spread by media about Islam and Muslims.

“In the West, conversion to Islam has been tarnished by claims of extremism (violent and non-violent), radicalization, and, sadly, terrorism,” Professor Yasir Suleiman, Director of Cambridge’s Centre of Islamic Studies, told Cambridge Research News on Wednesday, February 3.

“It has also fallen victim to the general apathy towards faith in largely secular societies causing those who convert to be described by some as not only eccentrics, misfits, outcasts and rebels, but also as renegades, traitors or enemies of a fifth column who have turned their back on their original culture(s).

“Converts can be made to feel outsiders from the lives they have left behind and as new members of the faith they have embraced upon conversion. This report reveals that conversion to Islam is as much a matter of the head as it is for the heart and soul,” he added.

The new report, produced by Cambridge’s Centre of Islamic Studies, examines the reversion journeys of nearly fifty British men of all ages, ethnicities and faiths.

Titled, ‘Narratives of Conversion to Islam in Britain: Male perspectives’, it allows an unprecedented examination of the challenges and concerns facing converts to Islam in the UK today.

The report captures the isolation and dislocation felt by many new reverts, and the sense of being a ‘minority within a minority’ as they adjust to life as a follower of one of the most maligned and misunderstood faiths in the UK.

“What this report also illuminates is the importance of convert-specific organizations. There is not enough support for the convert community as things stand,” Prof Suleiman said.

“But by sharing their experiences frankly and honestly, this diverse group of converts revealed a profound sense of their pride in both Islam and their British heritage, despite the often negative portrayal of converts in the mainstream press.”

The report follows Cambridge’s hugely successful report into female conversion in 2013, which has been downloaded more than 150,000 times from the Centre of Islamic Studies’ website. 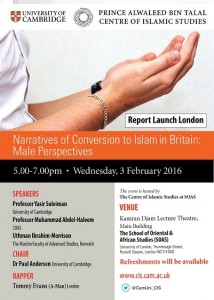 The report will be launched on Wednesday 3 February, 2016, in Cambridge

Recalling their journey to Islam, some male Muslim reverts revealed challenges they first in their first days as Muslims.

“It was a very challenging time and an experience I won’t forget about,” Abdul Maalik Taylor, who converted to Islam from Hinduism 20 years ago, said.

Running now Islamic-themed tours of London, he said he suffered considerably after reverting to Islam.

“I suffered physical and emotional abuse from my family. It was a very testing time.”

Another participant, Adrian (Jamal) Heath, said he faced most troubles at work after taking the decision to accept Islam.

“I always joke with people that it’s a bit like ‘coming out’ and I’ve discovered a lot of people who concealed this until the later stages,” he said.

“I was exposed as a Muslim to friends and family inadvertently and my parents took it hard. They didn’t come to my wedding. I was also subject to some ridicule at work, which I now look back on as completely unacceptable in the modern world. I was ridiculed for my prayer times and to my face by people who had education and should have known better.

“As a white man in modern Britain, I’d never come across the feeling of being in a minority before and that actually quite shocked me.”

“You find a number of stories that concentrate on radicalization,” Taylor said.

“If there are successful Muslim converts who have contributed to society and to Britain, they won’t get highlighted by the media.

“Why do the media have a set agenda to try and demonize us?”

“Generally speaking, when I see converts on TV, they have been radicalized or involved in extremist activity. So for me personally, it’s a double whammy,” he said.

“Firstly, the negative portrayal of Muslims as a whole and within that, a sub-context of the convert community being portrayed in a radical light, or that they’re most susceptible to ideologies of violence. Being a convert myself, and having met so many other converts, this is a fallacy.”

Tailor questioned why there seemed to be such a propensity for negativity in the portrayals of both Islam and reverts to the religion.

“You find a number of stories that concentrate on radicalization. If there are successful Muslim converts who have contributed to society and to Britain, they won’t get highlighted by the media. Why do the media have a set agenda to try and demonize us?”

Shahla Awad Suleiman added: “By pulling together these narratives of conversion we have dealt with topics of enormous importance, not just to Muslims, but British society at large.