A 69-year-old grandmother who stands outside an Islamic Center with a sign that says ‘I am your friend, I will watch while you pray’  has been nominated for a Pride of Reading Award,

Jean Scott-Barr has been standing outside an Islamic Center ever since the Christchurch mosque attacks.

“It sends a really strong message out about the importance of standing together in unity in the face of adversity, regardless of faith or background.

“I think that Jean is an inspiration to the people of Reading, and to people all over the world.

“I believe she deserves this award, as a thank you from all of those who she continues to motivate with her kind nature and to maybe encourage others to do more in their community to help one another.”

Her gesture of friendship was seen by people all across Reading – and the world – when she was photographed with her sign by Dr. Saqib A Choudhary on March 22.

Learning of her nomination, Jean said: “I’m amazed by it, I didn’t ever expect such a thing. However, if it helps to spread the word about the value of such a small action, then I’m very pleased.

“After the Christchurch attacks, I saw a photo of Andrew Graystone who was standing outside a mosque in Manchester with a similar sign.

“I was horrified by the attack and about the way Muslims are being vilified in the media and by politicians but had felt helpless to do anything about it.

“Seeing Andrew, I thought ‘this is something I could do’.

“I wanted to show that there are people in this country, and in the world, who do not subscribe to the demonization of Muslims and Islam.” 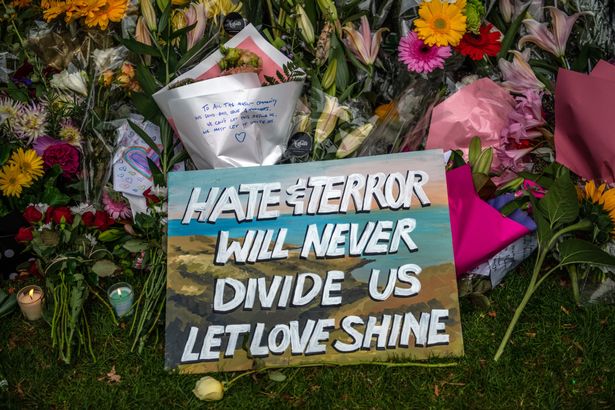 A message was left among flowers and tributes by a wall of the Botanic Gardens in Christchurch (Image: Getty)

Her inspiration, Andrew Graystone decided to stand outside Medina Mosque in Britain following the Christchurch Massacre in New Zealand while holding up a cardboard sign. His sign said: “You’re my friends. I’ll keep watch while you pray.” Within 24 hours, Graystone had received over 100,000 messages of support.

Graystone’s message of solidarity went viral and after the prayers had concluded, hundreds came out to thank him while he was unaware the imam had commended his actions.