ATHENS – The left-wing government is poised to back a plan to give Athens’ growing Muslim population the first mosque, after decades of objections that were often colored by the country’s fraught relationship with neighboring Turkey.

“The refugee crisis has increased the pressure for the mosque to be built,” John Dimakis, political analyst at Athens-based communications consultancy STR, told The Wall Street Journal on Tuesday, July 27.

The construction of the first official mosque in Athens has been approved, following the decision of the Council of State, Greece’s highest administrative court.

After decades of objections from religious and citizen groups, the way is clear for the issuance of a building permit.

The planed place of worship is a low-rise complex with no minaret and a prayer hall for up for 350 people.

The environment ministry and interior ministry are next to give procedural approvals. The construction is expected to cost 1 million euros and it will be fully funded by the state.

Local Muslim residents welcomed the court ruling in favor of the mosque. 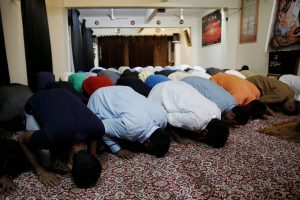 The Greek government intends the mosque to serve both Shiite and Sunni Muslims, according to a senior government official.

“It is small and doesn’t really cover all of our needs,” said Taher Alizadeh, a spokesman for the Shiite Muslim Community of Greece.

Decked with minarets two centuries ago, Athens has not had a functioning mosque since the end of Ottoman rule in the early 1800s.

About 130 windowless, airless basements or warehouses in Athens currently serve as makeshift mosques for an estimated 200,000 Muslims in the Greek capital.

The Orthodox Church has for years insisted that Greeks were not ready to see a minaret in downtown Athens.

The decision follows decades of objections that were often colored by the country’s fraught relationship with neighboring Turkey.

“Since the Greek war of independence against the Ottoman Empire, Greek national identity was built in opposition to Islam,” she said.

Despite the political and judicial support for the mosque, Greece’s glacial bureaucracy could still slow down its construction.

“The first bulldozer could get to work in six months’ time or in two years from now, depending on how the bureaucracy unfolds,” said a senior Greek government official.

“This, I fear, could the biggest obstacle to the project.”