LONDON – Local elections in England delivered a mixed set of results. The effects of years of austerity should have seen the Labour party sweep the floor, instead, the outcome for the two leading parties, Conservative and Labour, were mediocre at best.

Instead, the two most significant changes were the number of Liberal Democrats elected, along with the near wipe-out of UKIP, who secured just 6% of the council positions they sought.

In some councils, the government trailed a new system where voters had to bring ID. The Electoral Reform Society showed that almost 4,000 were unable to vote as they did not have the ‘correct’ ID, while a number of EU citizens were also told they could not vote when of course they were legally able to do so.

In addition to councilors, these elections included – in some parts of the country – selecting directly elected mayors. The first post of its kind, the Mayor of London, was created in 2000, a role is currently held by British Muslim, Sadiq Khan.

Residents of Newham elected a female British Muslim, Rokhsana Fiaz. A Labour candidate, she gained a landslide 53,214 votes accounting for 73% of the total vote count. That is 12% more than what her predecessor Sir Robin Wales – the nation’s longest-serving mayor – received in the 2014 mayoral elections.

Speaking to the local publication the Newham Recorder, Rokhsana said, “Wow. It’s mind-blowing. It says to me two things about Newham – one, the amount of trust and hopes they have in the Labour Party, and the fact that we have been accelerating over the last couple of years since Jeremy Corbyn’s leadership.”

“Eight years of devastation by Tory cuts is showing with wins like this. I think it reflects the confidence of the people in Labour’s ability to lead a council in the face of these cuts.’

Speaking of her success Rokhsana writes, “I would like to thank the people of Newham for putting their faith and trust in me, in Labour, and in my vision for our borough. This council will not only look different but will be different with more transparency, accountability, and residents involved in decision making.

Amongst the voices of congratulations were words from London Mayor Sadiq Khan who Tweeted, “Well done to the new Mayor of Newham @rokhsanafiaz and the @newhamlabour team. Really enjoyed campaigning with you – and look forward to working with you to deliver for local residents across the borough.”

Well done to new Mayor of Newham @rokhsanafiaz and the @newhamlabour team.

Really enjoyed campaigning with you – and look forward to working with you to deliver for local residents across the borough. #TeamLabour pic.twitter.com/rtO01Y7KCW

But in a strange twist to local politics, one of Rokhsana’s campaign commitments is to remove the mayoral structure in Newham.

Speaking to the Evening Standard newspaper Rokhsana said, “We need to get people involved and excited about local politics. I am agnostic about the mayoral system. We can’t have a referendum straight away, but there will be one during my tenure as mayor, I have promised that. There is a crisis in democracy at the moment. People feel disenfranchised with politics and that is why we have seen these huge swings to the right in Europe and the election of Donald Trump in the US. Any sensible politician, be they at the local or national level, has to respond to that.’

Among Rokhsana’s firm campaign commitments, “I will clean up the Council’s budget so that it is open and transparent. I will report back to residents and the Council with a detailed and costed implementation plan that takes into account the resources available.” 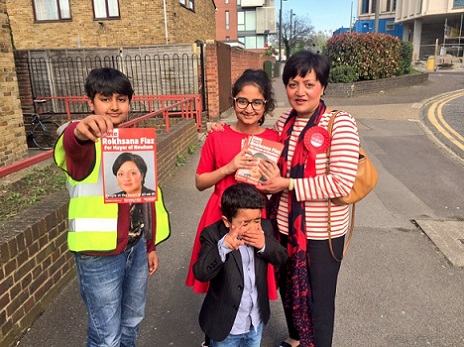 Rokhsana is building on her vast experience. From leading large scale projects with the European Commission and the Council of Europe to being the CEO of an international UNESCO supported charity promoting interfaith and global citizenship around the world.

Rokhsana is also one of the few politicians who has actively campaigned against tax avoidance, believing that ‘everyone, including the super-rich, should pay their fair share of tax.’

Rokhsana received an OBE in 2009 for her work in race, faith, and identity.

In a Q&A with On London, Rokhsana was asked that while she’s been a councilor for four years already, what makes her think someone as inexperienced as her can do the huge job of being Mayor?

Rokhsana replied, “For one thing I don’t believe I am inexperienced. I have a broad-ranging career background and I’ve operated at senior and executive level.”

“I don’t buy into this idea that you have got to have held a position for a certain length of time before you are ready. I don’t need anyone’s permission to be a leader. Throughout different stages of my life, from a young age, I’m proud that I’ve been able to demonstrate leadership in very different circumstances.

“I appreciate the acute challenges and complexities of running a local authority and the value of building a team of talent around you. Successful institutions or companies or local authorities don’t revolve around one individual. Success is built on people working together. That’s something I fundamentally believe in.”

The Editor of the publication Eastern Eye congratulated Rokhsana, “She has gone from working in McDonalds as a teenager in Newham to becoming its mayor with over 70 percent of the vote. Well done @rokhsanafiaz for shattering a glass ceiling & showing impossible dreams can come true.”

She has gone from working in McDonalds as a teenager in Newham to becoming its mayor with over 70 per cent of the vote. Well done @rokhsanafiaz for shattering a glass ceiling & showing impossible dreams can come true. #newhammayor #Election2018 pic.twitter.com/5Q7XyzSw7j

The London Borough of Newham’s motto, from its Coat of Arms, reads, ‘Progress with the People.’ It is fitting that Rokhsana will now take the helm, and lead her community to progress.