LONDON – After terrorists mounted an attack in the Spanish cities of Barcelona and Cambrils, murdering 14, leaving 17 in critical condition, and injuring over a hundred more, the world once again comes together in condemnation.

As stories pour in of the survivors from both locations, journalist Abbas Nasir makes a poignant observation on how these terrorist attacks have little to do with people or the place, rather are simply a means for the spiritually defunct to cause harm. “Before the Iraq war, Barcelona showed solidarity with Iraqis, opposed US aggression in mass protests. This is how Jihadis reciprocate.”

Alarmingly, after an almost instant condemnation – very different to his response to white supremacist terrorism in Charlottesville – President Trump Tweeted a lie that was instantly  debunked by almost everyone, including the rumor busting website Snopes, that an American General, Pershing, shot terrorists with bullets soaked in pigs blood, which then stopped terrorism for many years. It is a sad day when the President of the United States needs to understand that pigs are not a ‘Muslim-kryptonite.’

Here in the UK, Prime Minister May said that she was “sickened by the senseless loss of life in Barcelona,” adding that she “stands shoulder to shoulder with Spain in confronting and dealing with the evil of terrorism,” again a very stark response to her criticism of Charlottesville, demonstrating a troubling pattern, different responses, depending on who is committing the act of terrorism.

Expanding on this now common pattern, the UK radio station, LBC’s (Leading Britain’s Conversation) presenter Maajid Nawaz said, “If we recognize after Charlottesville that there’s an ideology at play such as white supremacism that we must challenge at every opportunity, then likewise, we must recognize after attacks in Spain that there is also an ideology in play…. Every time there is a right-wing terror attack people on the far-right try to contextualize it, try to say it was an isolated incident. They don’t want to challenge neo-Nazi ideology and yet every time there’s a jihadist those on the far-right do want to talk about ideology.”

Later his colleague at LBC, Nick Ferrari, responded to a caller who called for the wholesale punishment of Muslims, in shock asking, “We start rounding up innocent Muslims, do we? And we don’t care if they’ve done anything wrong? Gosh, where did that happen in Europe once before? Why don’t we make them (Muslims) wear a special badge on their clothes?” 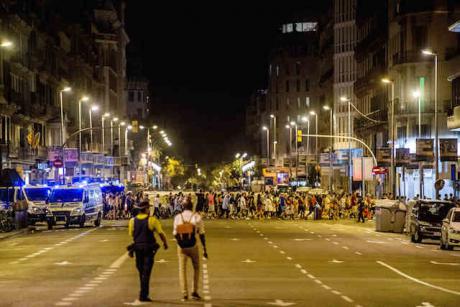 Whether it is hate for other human beings, or a warped and abuse exploitation of religion, it is difficult for the everyday person to understand how the mind of a terrorist must function, for the vast majority of us seek to preserve human life, not extinguish it.

At the time of writing, four terrorists are in police custody, and perhaps with time the authorities can identify the root causes of their extremist ideologies and put forward a solution to address them.

As the BBC recently covered the partition of India into three nations, India, Pakistan and Bangladesh, tensions and emotions ran high as many believe that it should have never taken place.

Many eye-witnesses to the events observed that one minute Muslims, Hindus and Sikhs got along well and lived peacefully as neighbors. The next, nationalism stepped in leading to neighbors turning on each other in the most horrific of ways.

The desire of Muslim terrorists stems from the same misplaced ideal of what it means to be a Muslim, contradicting Prophet Muhammad’s own design for city living: a place where people of all faith, can live together in peace.

Just as it is a convenient distraction for the often weak-minded, easily led, the foolish, and the down right inflammatory, the ideal of an Islamic State, of just Muslims, is an illusion.

Instead, every effort that brings people together with the singular principle of justice for all, it is this model for life and living which reflects the attribute of a God, a Creator, Who says that God is Just. Oppression, harm, terrorism and abuse, are the anti-thesis of all that any faith or ideology should stand for: be it in Barcelona, Charlottesville, or anywhere else.

Just as the name of the long road where the terrorist incident took place, Las Ramblas, has a name whose origin in Arabic means a ‘riverbed that is dry,’ these terrorists who casually took innocent lives, harming others, have an empty, dry soul, devoid of the spirit that gives life beauty, meaning or purpose.

And while their objective – disruption – has been achieved, residents of Barcelona, Cambrils, and any other city that suffers from terrorism, may be hurt today, but tomorrow, they will continue to live their lives with the richness that terrorists are envious off and wish they could taste; even if just for a brief moment. Barcelona’s spirit will not run dry.

Prayers and thoughts for those who have passed away, those who are injured, the families of all who are affected, and for all of the rest of us.