British Muslim leaders and influencers were invited to an Eid event hosted by Prime Minister Theresa May. With many difficult situations from the government’s Prevent program to indirect involvement in wars such as those in Yemen to Brexit, many British Muslims feel at times disenfranchised. Entrepreneur Shahzad Younas, founder of mismatch shares his thoughts on the event and the opportunity to meet with our Prime Minister.

“A week ago I received an email from the Prime Minister inviting me to 10 Downing Street to celebrate Eid with other Muslim figures in the community. I was initially over the moon to be recognised for the huge success muzmatch has had both here in the UK and abroad. Alhamdullilah we’re shaping up to be a real British Tech success story.

“But then as the days passed something tugged at my conscience. To be frank, I’m not a fan of Theresa May, her party or her politics. Collectively alot of damage has been done to Muslim relations both here in the UK and abroad as a result of their policies. Something didn’t sit quite right with me to attend such a function. You are the company you keep, they say. What would it say about me as a person?

“I still hadn’t made up my mind, as I saw some other figures in the community publicly boycott the event – on similar grounds – from foreign policy, Grenfell, Conservative Party Islamophobia as well as foreign policy. Grounds which I respected and fully resonated with me.

“I then stepped back and thought, what would I achieve by not attending? Would they lose any sleep if I didn’t attend? Of course not. There would be plenty of others who would. Would I get any sort of point across by declining an invitation? Probably not – the RSVP email address was a generic one.

“I spoke to close friends, and heard a range of opinions on the matter. I prayed istikhara and slept on it.

“After much self deliberation I decided to attend, however promising myself that I would not let the opportunity to speak directly to the Prime Minister be wasted. Opportunities such as this are fairly few when you’re not naturally in such circles. 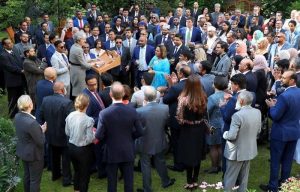 “Monday was the day of the Eid celebration in the gardens at 10 Downing Street.

“There were some faces I recognised, some friends too. Then there were some I would rather not meet. People who have caused a lot of damage and distrust between Muslim and government relations in this country.

“I stood and observed as she entered the gardens with her entourage. Seeing lots of Muslim attendees suddenly desperately jostling to go and speak to her and be present for photos was quite a sight and a little cringeworthy.

“After being introduced by Sajid Javid, she then began with Assalamu Alaikum (which drew applause) and then gave a short speech about the contribution to British life Muslims have played and wished Eid Mubarak to the attendees.

“I was then asked if I would like to meet and speak to Theresa May herself after the speech. I said yes I would love to.

“As she finished her speech I stood to one side as a civil servant then introduced two other attendees to her. They thanked Theresa for all her work for the Muslim community. At this point I was scratching my head trying to figure out what exactly that could be.

“Then it was my turn. I shook her hand and said thank you for inviting me to the event. I then said that I have been troubled by the role of the UK in the current situation in Yemen with respect to British arms sales. Cue awkward glances by some of the attendees close by.

“Safe to say she was caught off guard with my question. Up until that moment she only had niceties said to her. To be fair to her she did respond – saying that in her eyes providing aid to the people of Yemen was crucial and that a long term political solution is key. I then said that’s all well and good but at the same time we are providing the means for this conflict to continue. At that point I was hurriedly moved along so others could introduce themselves.

“What did it achieve? Did it change anything on the ground there? Of course not. Did it bring to her direct attention something that British Muslims care about? Absolutely.

“Having observed the event and the interactions I saw, I realised collectively most were happy to be there and were grateful for it. It was all very polite and cordial.

“Yet to me it equally showed that as a community, at these levels we lack confidence in ourselves. Particularly to bring up difficult questions which relate to the Muslim community as a whole. Maybe I’m just too cynical. 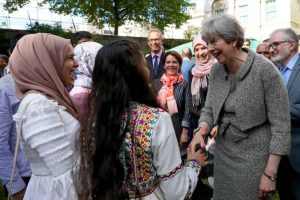 “In business you learn to play the long game. The same applies here. We should too. Work to positions of power or access, and then do our best to effect some change. Whilst staying true to ourselves. Or at least to voice that change in the hope of making a positive difference. But we shouldn’t be too timid, to not speak our mind on important matters.

“I respect those who declined to attend on the grounds above. It definitely takes someone to put their own ego aside and turn it down and to take a principled stance.

“Similarly those who did attend – fair play – it is not often you are invited to such an occasion and to many it is a huge moment and honour for them.

“I hope more of us choose instead to engage on every level in a smart and respectful way – and directly make your voices heard – at any and every opportunity you get. There is real power in unity here, if only we realised.

“Of course given the high level of awkwardness I wouldn’t be surprised if I were to not be invited again. But rather that, than let the opportunity to speak directly to the Prime Minister be wasted.

“Ever the optimist, in my eyes, at least perhaps, just perhaps, the Prime Minister may think back over today and be reminded of that Northerner talking about the situation in Yemen. And who knows – maybe her conscience would also tug at her.”