LONDON – A BBC documentary on the British Muslim community will air later on December, showcasing the diversity of the religious minority and sparking a heated debate on the show, now being described as the “Muslim Big Brother”.

“We welcome a show which demonstrates the pluralism within Muslim communities and humanizes them,” Fiyaz Mughal, founder of Tell Mama, the charity that provides support to victims of anti-Muslim hate crimes, told The Observer on Sunday, December 4.

“In the current climate this is warmly welcomed.”

Described as the “Muslim Big Brother”, “Muslims Like Us” documentary will feature ten strangers holed up in a house, including, in this case, a part-time model, a comedian, a gay man and a former boxer.

Filmed over nine days, the two-part documentary will be broadcast next week. The BBC describes it as a “social experiment” looking at the diversity of the Muslim experience in Britain.

Participants in the program are seen in various scenarios, from a night out at karaoke to setting up a stall handing out leaflets on Islam to passers-by in York.

Meanwhile debates take place on everything from race and sexuality to who should do the washing up.

The idea of the documentary was praised by the Muslim Council of Britain (MCB), describing it as sharing a “safe space” for discussion and debate on topical issues of difference.

“It will be an opportunity for the rest of the nation to have an inside view of the broad diversity of Muslims living in the UK, and that we are all different in our own way, with individual tastes and choices in lifestyle, but we can still share the same faith,” a spokesperson of the MCB said. 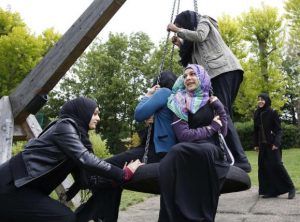 The program producers said they wanted to create a microcosm for the diverse cultures and opinions within the Muslim community.

“We wanted to tap into the conversations happening within the Muslim community and their struggle to define what it means to be a British Muslim,” said Mobeen Azhar, the series producer.

“Many Muslims feel they are in the spotlight and have to justify themselves constantly. We explore the diversity within the community and issues such as race and sexuality, but in a very raw, human way.”

Joining the team of the documentary, a 27-year-old teacher Mehreen Baig said she wanted to represent average Muslim women.

“I entered the show to represent the middle girl, not too liberal, not too conservative. When people think of Muslim women, there’s a stereotype of us being repressed and submissive. Someone like me doesn’t come to mind – a normal girl, with a career who watches X Factor and fasts at Ramadan.

“We are the majority, and unfortunately our voice is unheard. My presence in the show challenges that stereotype. I’m independent and educated, yet my life is very much moulded by my religious values. I’m proof that there can be, and is, a balance between both.”

The program does not shy away from looking at controversial issues within Muslim society.

Viewers will witness one contestant, 31-year-old engineer Ferhan Khan, nervously coming out as gay to the other housemates and another, Nabil Abdul Rashid, talking about his wife, who is of Pakistani origin, receiving racial abuse for being married to a black man.

Explaining his decision to appear in the documentary, Rashid said: “I took part because, as someone who complains about the lack of representation of practicing Muslims in mass media, I feel if you want something done you should do it yourself, instead of sitting at home swearing at the TV.

“I hope the show humanizes Muslims and shows we are a wide range of people with different views, struggles and experiences. The only thing I can say we all agree on is that we want to be allowed to live in peace.”