SYDNEY – Following Australia’s The Voice presenter Sonia Kruger’s call for a ban on Muslims moving to Australia, out of her concerns “as a mother”, a Muslim mother of western Sydney invited her to her home so she can help her understand Islam.

“I don’t hate Sonia and I sort of understand where she is coming from but we’re not safe either. I feel a bit hurt by it all,” Merrylands mother-of-four Mona Alahmad told Daily Telegraph on Wednesday, July 27.

Kruger told Today show after the Nice attack, in which third of victims were Muslims, she would feel safer if the borders were closed to Muslims for a while.

“Personally, I would like to see [Muslim migration] stop now for Australia,” she said.

She later said on Twitter she was concerned “as a mother” and that there should be open discussion of the issue.

“I would love for her to come here. I feel sorry for her for not understanding. Muslims are being killed as well. These terrorists aren’t real Muslims. If they knew Islam properly, they would know it promotes peace and kindness,” she said.

“Sometimes I feel like crying. What do I tell my kids? Do they change their names and not tell others they are Muslim? I don’t want my kids to grow up with all the hatred,” she added.

The hashtag #asamother has since been trending in Australia, with many accusing her of racism.

The controversy intensified after she defended her views on Twitter, using her status as a parent.

“Following the atrocities of last week in Nice, where 10 children lost their lives, as a mother, I believe it’s vital in a democratic society to be able to discuss these issues without being labeled racist.” 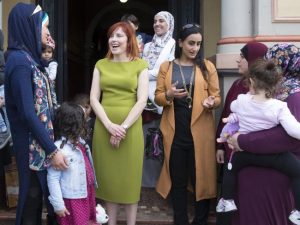 Alahmad, who wears a hijab, doesn’t think Kruger is racist.

“She has a right to say what she thinks but she’s gone just one way. A lot of people look up to her and you’re trying to get on with your everyday life,” Alahmad said.

“She’s well-known and now it makes it difficult for people to accept you. The finger is always pointed at you.”

Alahmad on Friday joined other Muslim mothers and their children in Granville, along with Granville state Labor MP Julia Finn to celebrate acceptance and multiculturalism.

Finn said she would like to see Kruger visit Granville.

“The diversity of our area is what makes our community so strong. I invite Sonia to come back to Granville Town Hall, where she became a star, to meet Muslim mothers and see how much they have in common so she can conquer her fears,” Finn said.