AUBURN, New South Wales – Dubbed as excitement machine, Lael Kassem, a founding member of the Auburn GIANTS women’s AFL team, is breaking down barriers, working hard to achieve her dream, and motivating others to take up the Australian popular sport.

“Playing Aussie rules made me stronger in my identity as an Australian,” Kassem told Herald Sun.

The young Muslim woman plays for the predominantly Muslim Auburn-Penrith Giants in Sydney’s premier division as well as coaching their youth girl’s team.

She is also studying for her PhD and has just been awarded the Jesaulenko internship, and is currently embedded in the Giants’ coaching department.

The internship is named after Carlton Legend Alex Jesaulenko who was born in Austria in 1945 and after migrating to Australia played Rugby and Soccer in Canberra before taking up Aussie rules.

Jesaulenko has spoken many times about how footy helped him engage in Australian culture and Kassem is doing the same.

“It was the same for my team mates, footy allowed us to travel and meet people from Anglo-Saxon backgrounds and play against them which I would not have done without the sport,” she said.

“The opposition teams were very welcoming and made that integration into the broader community easier.” 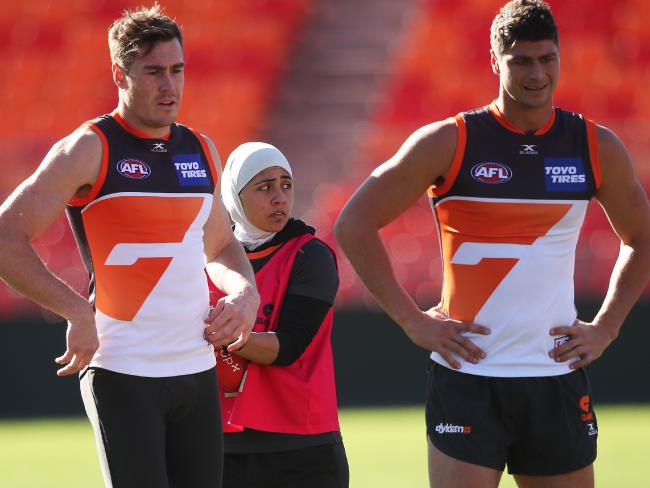 Inspired by her nine brothers, Kassem has been playing football since 2011.

She says her involvement has been a great vehicle to bring people from different backgrounds together.

“Everybody wants to categorize us and talk about our differences,” Kassem said.

“Let’s focus on what brings us together and what we have in common, that’s footy. We all love playing Australian rules football. We can all talk the language of football.

“I’m Lebanese-Australian but I’m playing footy and integrating into Australia like everyone else.”

Kassem is hoping her involvement with the Giants coaching staff will help her one day line up for GWS in the AFLW.

“I’m still motivated to play at the highest level in the AFLW and this is inspiring me to follow that dream and is giving me a deeper understanding of the game I didn’t have before.”