The terrorist attack on two Christchurch mosques killed 50 Muslims and injured more when an Australian terrorist of a European ancestry mass-shot worshippers on Friday prayer.

Shakti’s facilitator, Sakina Husain, said: “But, the outpouring of love for the Muslim New Zealander community in the wake of the terrorist massacre has gone a long way to stem some of those fears.”

“The response of the nation has helped an amazing deal. But for many their first instinct was, and still is, fear. As a Muslim, when I first heard the news, yes there was fear at having to go out and walk on the roads.

“Many of the women we deal with aren’t directly affected but they’re still afraid of wearing the hijab and walking on the road. We’ve gotten a call from a school where children are afraid for their mothers,” Husain said.

Many groups also called on women to don the hijab for one day to show solidarity with the Muslim community, especially women. 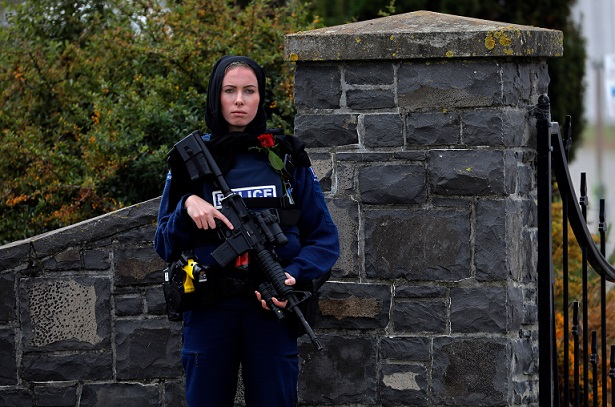 A police officer stands guard with a rose at the service for a victim of the Friday March 15 mosque shootings for a burial at the Memorial Park Cemetery in Christchurch, New Zealand, Thursday, March 21, 2019. (AP Photo/Vincent Yu)

Shakti representatives have since visited the school and would be assisting to ensure the children had the help or counseling that they needed.

“The response from different citizens in the wake of the attacks had helped Muslim women overcome their own fears of wearing hijab in public. As a Muslim I don’t feel afraid anymore,” Husain believes.

“In terms of the response of the country, that has helped a great deal. People are hugging me now, so that’s amazing. And I’d like to say to the people of New Zealand, they’ve warmed my heart. I’ve no words to express how much. It’s beautiful and I think Muslims wouldn’t be able to handle this the way they’re, without this support,” the facilitator expressed.

On her behalf, Shakti case manager, Rina Singh, said: “some Muslim widows of the massacre victims would need long-term help as they dealt with their own trauma and adjusted to their new lives. Many of the women were young housewives, didn’t have jobs, couldn’t drive, or were new to this country.”

“Some had experienced delays in receiving financial assistance from the government because family members had wrongly applied for the money on their behalf. The government is making sure that the money is going to the right person, it’s being very vigilant of that, but it is causing delays,” she said.

Husain explained that counseling isn’t something that’s commonplace in this culture. This’s my primary goal, to make sure this knowledge reaches them.

Coming each year on February 1, the World Hijab Day is marked across over 140 countries.

It is aimed at fostering religious tolerance and understanding by inviting non-Hijabi Muslims and non-Muslims to experience the hijab for one day.