SYDNEY – New South Wales MP Mehreen Faruqi, the first Muslim woman in any Australian parliament, has launched a new project on Facebook to counter sexist and racist abuse message she receives with humor and a good laugh.

“What is happening online is a venting of that particular set of prejudices and I think we need to deal with them,” Eva Cox, one of Australia’s leading feminist writers, told the BBC in Sydney on Sunday.

“It comes from a sense of being overlooked, neglected and unloved.

“We have got to take that to heart because otherwise we’ll drive all that discontentment into something and that was where the Nazi Party came from. It came from people who were deeply discontented with what had happened at the end of the First World War where they had really been pushed too hard, and somebody came up and said, ‘We’ll make Germany great’ and look what happened.”

Dr Faruqi is an Australian Greens Party MP in the New South Wales Upper House, and a former environmental engineer.

Since winning election in 2013, she has found herself facing a grotesque cascade of abuse unleashed by internet trolls.

“There is this real vile mix of racism and sexism that is happening within Australia from certain people who don’t believe I belong to this country, maybe because of my color or the religion that I belong to. That is pretty upsetting,” Faruqi said.

Yet, she decided not to allow racism and sexism abuse ruin her life, fighting back against her tormentors by launching a Facebook project. 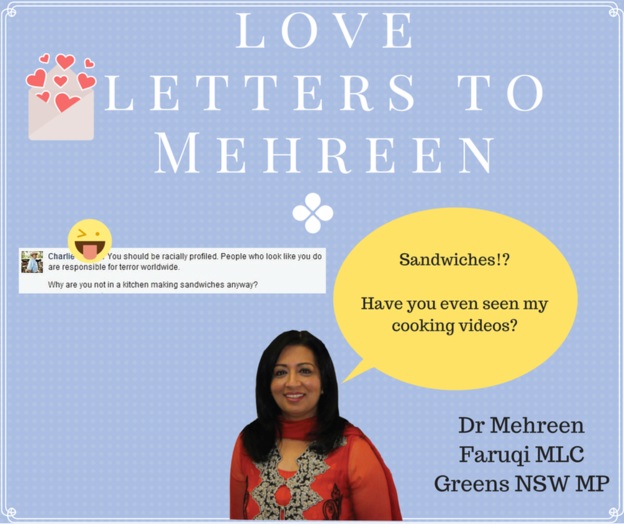 “I decided to start a project on Facebook and it is called Love Letters to Mehreen. So every few weeks we pick a particularly hate-filled message and I respond to it in a humorous way, and that has really taken off,” she said.

“I think people do appreciate that we are exposing these issues and, of course, it is quite cathartic for myself and my staff as well,” she added.

Faruqi explained that she and her staff pick a particularly hate-filled message every few weeks and respond to it in a humorous way.

An example of hate-filled message that Faruqi receives are questions like how a Muslim has been let into Australian politics. She believes that anti-Muslim views are nothing new, but chooses to respond to them “with just a touch of sass” and hides the identity of her critics when she reposts their offensive messages.