Rasha Ahmed, a Muslim, signed her three sons up to Australia’s first all Islamic Cub pack, attached to the Australian International Academy, a Muslim school in Coburg, to encourage her kids to acquire scouting values.

“I love the Scouts program. I love what it gives,” Ahmed told The Age on Tuesday, August 23.

“There’s a lot of education about respect, working together, independence, mixing with society, helpfulness. All these values are very important. It’s something I really believe in.”

Ahmed said Scouting was popular in her native Egypt where is it called Kashafah, derived from an Arabic word for “exploring”.

Her sons, 10-year-old twins Younus and Yahya Salman, and Dawoud Salman, 9, had been to trial Cub sessions involving visiting the elderly and cleaning up litter in parks.

Like many parents, scouting offered her kids a wider world and a chance to interact with people from different backgrounds at camps and events. 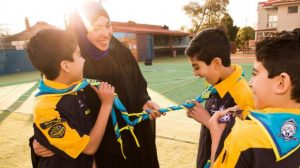 One curious rule was that Scouts shake hands with their left hand, whereas Muslims shake with their right hands.

This was derived from Scouts’ founder Lord Baden-Powell’s encounter with an African tribe, and signifies peace.

“I was fascinated and thought it was beautiful and my kids learnt something new,” Ahmed said.

The new Muslim scouts pack proved that Scouts, which was originally Christian, is now shared by different faith and groups/

Academy teacher Carlo Belfiore said the Scout promise, “On My Honour, I promise to do my best, to do my duty to my God, and to Australia” might have been problematic.

“But the staff at the school were satisfied that the ‘duty to my God’ is the God in which you believe [Allah], so it wasn’t a problem in them saying that, and the parents were happy.”

The idea was a way of connecting Muslim youth with the broader community.

It might deflect some “negative heat” towards Muslims from the media and elsewhere “and show the world that we do actually participate in civil society, and we’re engaged and teach our students that as well”.