SYDNEY – Muslim leaders have expressed concerns over One Nation leader Pauline Hanson’s burka “stunt” in the Senate, warning it could encourage US-style “alt-right” attacks on their community.

“The effect of what she is doing, particularly now with the divisive events that are happening in the US, can only serve to encourage the extreme Right and also to feed into existing Islamophobia and the fear of minorities,” Silma Ihram, president of the Australian Muslim Women’s Association, told The Australian.

Hanson arrived for Senate question time on Thursday, August 17, dressed in the full-body Islamic dress, which covers the face.

The far-right senator, who believes the burka should be banned in Australia, was rebuked by Attorney-General George Brandis for what he described as an “appalling stunt”.

“I can tell you it has been the advice of each director-general of security with whom I have worked and each commissioner of the Australian Federal Police that it is vital for their intelligence and law enforcement work that they work co-operatively with Muslim communities,” Senator Brandis said.

“And to ridicule that community to drive it into a corner, to mock its religious garments is an appalling thing to do.” 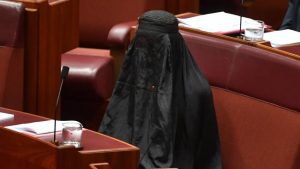 Senator Brandis’s condemnation was greeted by a standing ovation from Labor and the Greens.

“I’m not going to endorse it happening in the Senate chamber because I don’t think these stunts are ultimately helpful,” Senator Bernardi said.

Islamic Council of Victoria vice-president Adel Salman agreed and said he was already seeing a rise in attacks against Muslim women and children.